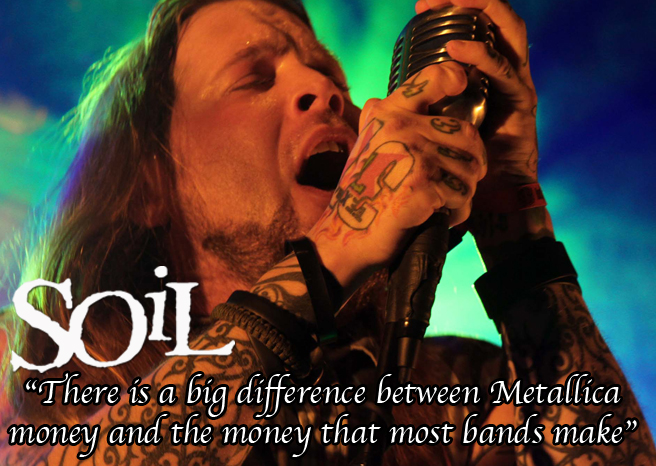 Before the New Year we caught up with SOiL, who at the time had just launched their Kickstarter campaign. A campaign that was to raise money, so the band could record a new album. With the return of original vocalist Ryan McCombs in 2011, the band started to talk about writing a new album. Ryan went on to say…

“As the talk of a new album got more serious, the one thing we all had in common was we wanted to keep control of it from the writing of it through to the publicity of it and everything in between. In order to do that , you got to fund it, regretfully in this business there is a big difference between Metallica money and the money that most bands make, so we needed help in order to do it.”

Ryan came up with the idea to start the Kisckstarter campaign…”First I wasn’t really big on it because I felt like I was sitting on a street corner, with my hand out …. to allow us to do what we do. But our fans, the response has been amazing”. The bands original goal was $15,000. To date the campaign has raised over $19,000. The band said that “Anything we raise above the goal will be directed toward marketing, touring, and overall promotion of the album. Hope to see you soon and thanks for the support!”.

Before the New Year SOiL were on tour with Fozzy, Breed 77, and newcomers Villains. SOiL bassist Tim king said “Everyone has been cool, everyone has been friendly, this tour has a good blend of musical styles, the crowds have been great”. So far there have been no announcements of SOiL making any festivals appearances in 2013, but Ryan said that of course it would be “Something they would like to do” this up coming summer.

So what can we expect from SOiL in 2013? The release of a killer new album, ready for summer 2013! The band are due to start pre-production this January and sometime late February the band will start the recording process.

Listen to SOiL classic ‘Halo’ below: