The Blackout at Butserfest 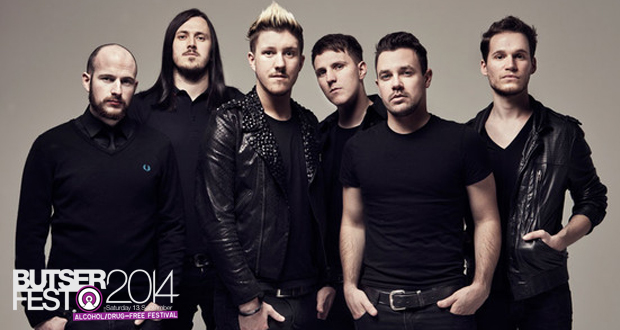 It’s been a turbulent year for The Blackout. Releasing their ‘Start The Party’ album in October 2013, the album tour was cut short when co-singer Gavin Butler had to leave the stage during their Manchester show due to a hemiplegic migraine. After the necessary rest and recuperation the band are back and stronger than ever, using new EP ‘Wolves’ to give them a new fervor for making music, and reminding them how much they love what they do!

They talk about the Kickstarer campaign, and how popular to was so quickly. We also talk about the ease and perhaps modernity of bands now doing EPs rather then Albums.

The Blackout have just released their first video from the forthcoming EP out 27th October.  Lead single ‘Wolves’ was the Radio 1 rock shows ‘Rockest Record’ recently and is now ‘C list’ on the station.

Check out the video here:

The band will head out on the road in November with Yashin & When We Were Wolves.  The tour will see them put an end to a turbulent 18 months in camp Blackout including their album tour being postponed due to a sudden and shocking neurological issue with singer Gavin Butler and will be supported by a self-released EP ‘Wolves’ due out 27th October.  ‘Wolves’ was made by raising proceeds through Kickstarterand the band reached target in just 3 hours.

‘Wolves’ was “born from the previous, frustrating year” says Gavin Butler.  “It took a lot of determination and sacrifice to pick ourselves up and carry on with The Blackout. The main reason this happened was our vision for ‘Wolves’. Writing these songs not only gave us a way to vent our frustrations but gave us a fresh fervor for making music and the much needed awakening to the fact that we all love being a band. So we thought, lets just take back control.”

TOUR DATES with support Yashin & When We Were Wolves: