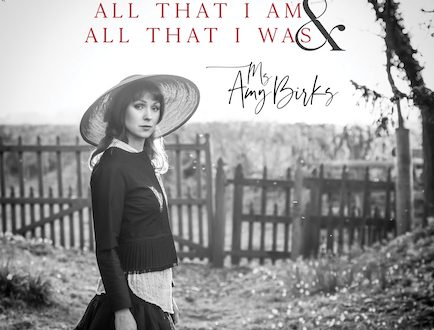 Voted Best Female Vocalist 2017 in Prog Mag’s 2018, and formerly a founder member of The Beatrix Players the winners of 2017’s Limelight Award, Amy Birks has released her first solo album, All That I Am and All That I Was.

Pre-empted by the release of two singles ‘Jamaica Inn’ and’ I Wish’, the album features special guest appearances, and videos for both of which can you can see screened here at RAMzine. They are also available for streaming, download and as an instant gratification track for fans making digital pre-orders of the album via iTunes.

Self-produced in the main, Nick Wollage who is famed for his sound engineering on major motion pictures like Atonement and worked with artists like Tony Banks on his Seven (A Suite For Orchestra), worked on ‘I Wish’ with Steve Hackett also on board playing acoustic guitar and featuring a lyric based on the words of Christina Rossetti – poet, activist and the subject of some of the most famous paintings of the Pre-Raphaelite movement.

“I feel very honoured to have worked with Steve Hackett and Nick Wollage. I wrote this song during a trip to Colombia where I was influenced by the classical guitar and percussive sounds of Bambuco. When I bumped into Steve at the Prog Awards, I asked him to play and he very kindly obliged. The Rossetti poem works perfectly as this is a dark lyric about the fragility of the mind and how the past can so very easily come back to tease and torment,” said Birks.

“This has been a really personal and full-on experience that has pushed me further, emotionally, technically and lyrically than I ever thought possible, which has enabled me to become the writer that I have been wanting to be.”

Brought up in Stoke-on-Trent in a house filled with music and a piano at her fingertips, the young Birks would start playing at age six, where according to the lady herself her soundtrack was: “Joni Mitchell, Don McLean, The Beatles and Supertramp… Dad was always singing Supertramp.”

She went on to study a degree in Music Technology at Staffordshire University – writing and production – with a brief time spent as a model. “I was used in things like adverts for DFS [the furniture retailer],” she laughed. “As I’m only five foot three I’d make sofas look bigger!” During this time, Birks was managed by a photographer who was friends with Brian Tatler, guitarist for the hugely popular New Wave of British Heavy Metal band Diamond Head. Birks’ manager suggested the two should meet.

The unlikely pairing led to Birks finding a mentor. “Brian’s a great guitarist,” she said, “He told me, ‘I’m going to show you how to write a song.’ As a child, I was always coming up with melodies or harmonising to songs and people on the radio. He showed me how to structure something – and I bought my first guitar, a Takamine, which I still have.”

“I’d go to Diamond Head rehearsals and make the tea,” she continued. “Then I’d sit on the floor and watch them go. There are a lot of great songs in heavy metal that we don’t appreciate – catchy melodies that connect to the classical world. What an education!”

While at university The Beatrix Players was formed with friends Tom Manning and Helena Dove, relocating to London in 2006, where by day she worked as a graphic artist, designing sunglasses and at night and weekends working on music, influenced by Eddi Reader, Ani DiFranco, Joan Armatrading and Natalie Merchant. By 2013 the trio had changed with Birks leading the ensemble vocally, Jess Kennedy on piano and backing vocals and Amanda Alvarez on cello.

An international concern blending chamber music, folk song and a progressive style they were soon compared to Tori Amos and Kate Bush with debut EP Words In Lemon Juice, although, at that point, although as the vocalist reveals: “We hadn’t listened to that much Kate Bush. The girls weren’t that into her but I started to investigate her a little more.”

Gathering momentum in the progressive scene, they released Magnified, their debut album, in 2017. They were soon opening for the likes of Carl Palmer, Steve Harley and Big Big Train. However, by the end of 2018, the band had reached a natural conclusion. “We were pulling in different directions [as songwriters] over six or seven months,” said Birks. “I needed to know if I could do this by myself.”

That was when her university degree became useful. “It had been a while since the Music Technology degree,”she laughed. “I hadn’t recorded myself and I certainly hadn’t produced and arranged, so I had to climb a steep learning curve but was really wonderful and I really enjoyed it.”

The eleven songs featured are mainly self-penned, and those having heard it describe her enunciated modern mezzo voice to be “By turns vulnerable, playful and powerful, her storytelling coming vibrantly to life with each track”.  All That I Am & All That I Was is also a highly personal endeavour. None more deeply than on ‘Say Something’ that relates Birks’ time as a teenage model and an older male who took advantage. “It’s not just about my experience, but also other people’s,” she expressed. “These songs help to take me through very difficult parts of my life. I’ve realised I’m much stronger than I thought I was, now I’ve had time to explore those feelings. But I’m okay, I really am. I’ve had time to understand those things and finally I’m okay on my own.”

As noted, All That I Am & All That I Was also features some welcome guest contributions. These include John Hackett who she cornered at one of his brother’s concerts. “Some of my compositions had flute in mind so I sent him the music, wondering if he could do something with a couple of tracks – and he’s on about nine of them!”

The cello was also an important feature to the mix. “I went to see Loreena McKennitt at the Royal Albert Hall and that’s when I saw Caroline Lavelle playing,” said Birks. “I was impressed because she had a bit of a rock edge, and luckily she knew my manager, so that was an easy connection. I was delighted when she said she’d contribute.”

“Things fell into place beautifully,” she continued, “and although I’d written a lot of the parts already I said to everybody, ‘Look, where there’s a space on this record see what you want to do’, and it just opened up this collaborative sort of feel. Caroline and John helped me shape the album.”

You can find out for yourselves on listening to All That I Am and All That I Was. It is available in a limited-edition CD package in a six panel 7″ gatefold sleeve accompanied by twelve page photo book available, in a 12″ gatefold sleeve edition and digitally. For more information click here.

Tagged with: All That I Am & All That I Was Amy Birks John Hackett progressive music Steve Hackett The Beatrix Players

Previous: Gruzja Live Release
Next: POTK Tell It Like It Is