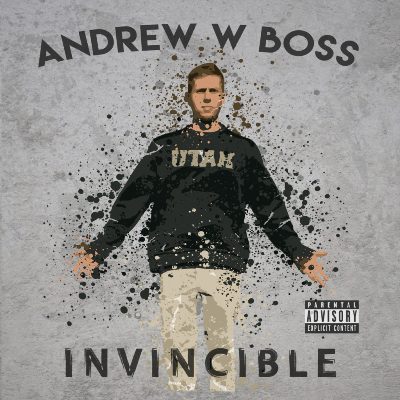 Andrew W.Boss hails from Salt Lake City in the USA, he has self-released his latest album Invincible that is said to transcend the rap metal tag; being equal parts rhymes, melody and pure brutality,

Boss has been recording since 2003, when he traded studio time for weed! Weaned on a musical diet of Metallica, Korn,Tupac, Beastie Boys, Mudvayne and the like, those who were different and special and willing to experiment outside of mainstream artists and sounds. Since then he completed half a dozen albums, both solo projects and projects with bands.  “I started out straight writing and recording hip hop, not really having a plan or any organisation, then I was in a band with my brother Flip for a while in Phoenix and really focused on the writing process and recording process,” Boss commented.

Invincible opens with ‘Avengers’,” and is followed by the first single, ‘Kleen’. “’Kleen’ is definitely a fan favourite, and it’s personal to me because it depicts my troubles with getting sober,” the singer stated. ‘Invincible’ itself features Chelsea Grin drummer Pablo Viveros guesting with Boss on drums, bass and guitars. “I met Pablo’s wife through my 9 to 5 a while back and she found out I was a musician and showed my stuff to him. We ended up hangin’ out at his studio when I was writing Invincible and he’s like, ‘I got this song I’ve been working on, you wanna use it?’ so I jumped on that. ‘Let Me Hear You’ is intended as a modern day anthem, while the pop- infused ‘Breaking Bridges’ features Poonhammer singer and Andrew’s older brother Adam, guesting with him on lead vocals.

You can check Andrew Boss’s Invincible out yourself by clicking here.