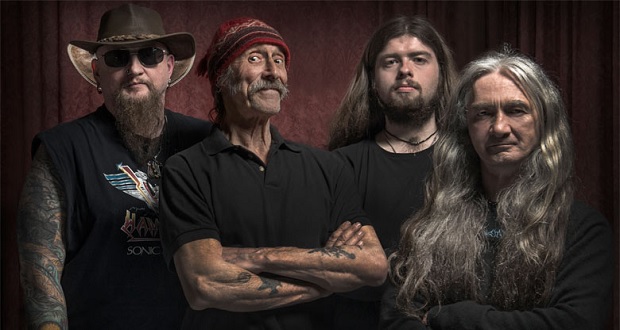 Legendary space overlords, the mighty Hawkwind, kick off their ‘In search of Utopia-Infinity and beyond’ UK tour on October 18th to promote their most recent studio album, ‘Road To Utopia.’  For the first five dates only on this tour, Hawkwind have a guest vocalist joining them, the legendary God of Hellfire himself, Arthur Brown, adding his unique style to the space rockers.

Yes, Arthur Brown as in The Crazy World Of Arthur Brown, aka The God Of Hellfire, the original shock-rocker.

Both Arthur Brown and Hawkwind appeared at the recent New Day festival together and their association goes back many years.

Hawkwind’s endless capacity for surprises continues with the announcement that for the first time in their almost fifty-year career: they will be performing with an orchestra, being conducted by Mike Batt, who worked with Hawkwind main man Dave Brock on the arrangements for the new album.

The tour commences in Salford on October 18th, and then proceeds onto ..

As well as a real orchestra Hawkwind will be supported on all seven dates by another orchestra, the excellent Blackheart Orchestra, a two-piece band who play many instruments between them, produce some delightfully ethereal music and, in Chrissy, have one of the best female vocalists around. The band were nominated in the ‘most promising newcomers’ section in the recent prog awards, showing how highly rated they are.