Selling England By The Pound in 2019 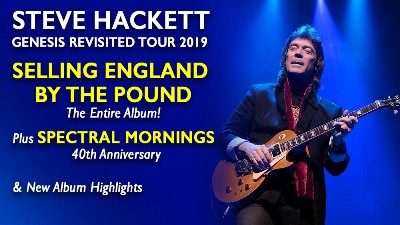 Steve Hackett has announced a 20 date UK tour to take place this time next year. As has been the manner of his recent annual outing he will devote most of the evening to a classic Genesis album on which he played guitar alongside other solo and band favourites. Fans will be delighted to learn that in 2019 it will be the turn of the majestic Selling England By The Pound to be performed in its entirety.

Released in 1973, Selling England By The Pound went to No. 3 in the UK charts and has been described as ‘the definitive Genesis album.’ It includes firm favourites such as ‘Dancing with the Moonlit Knight’, ‘Firth of Fifth’, ‘Cinema Show’ and, of course the hit single ‘I Know What I Like (In Your Wardrobe)’ that those old in the tooth will remember Pan’s People dancing to on Top Of The Pops!

2019 also marks the 40th anniversary of Spectral Morning, one of the guitarist’s most popular solo albums

And he will be celebrating this milestone by performing many classic from it, as well as offering the first live performances of what will be a brand new album.

“I’m thrilled to be performing the whole of my favourite Genesis album, Selling England By the Pound, which caught the attention of John Lennon in 1973. I felt that I was now playing guitar in the world’s best band, and everything was opening up for us,” said Hackett “Also I look forward to playing all the favourite songs from Spectral Mornings, marking its anniversary, plus new album tasters, as well as additional Genesis gems in a terrific grand slam!” 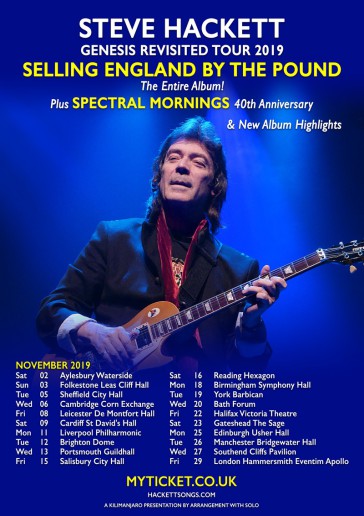