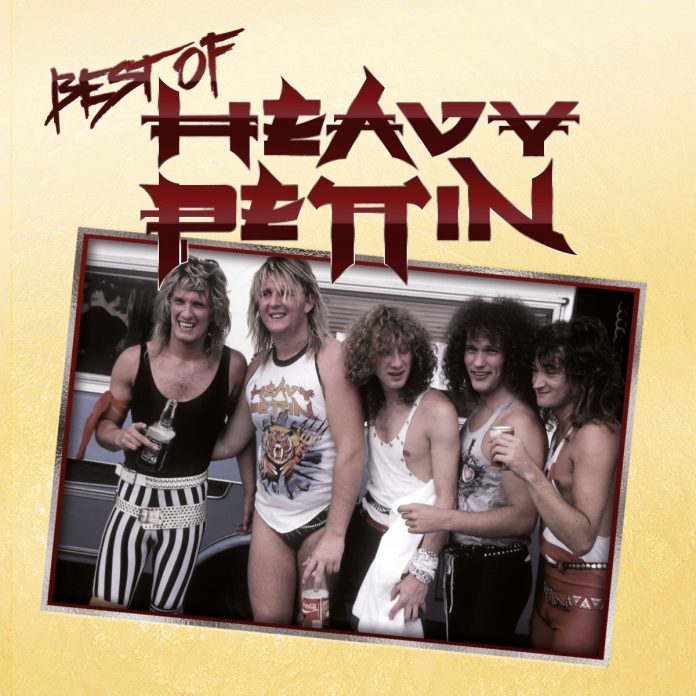 Hard rocking Scottish band Heavy Pettin release a Best Of album on 27th November, through Burnt Out Wreckords/Cherry Red, that includes chart hit singles ‘Love Times Love’, ‘In And Out of Love’ and ‘Rock Me’.

Heavy Pettin got together in Glasgow back in 1981 when guitarist Gordon Bonnar, drummer Gary Moat, bassist Brian Waugh, vocalist Steve ‘Hamie’ Hayman and lead guitarist Punky Mendoza joined forces with the intention of giving the biggest and best rock bands at the time a serious run for their money.

From 1982’s debut single ‘Roll The Dice’ on Neat Records to signing with Polydor Records and Queen guitarist Brian May and Reinhold Mack producing 1983 debut album Lettin Loose they ended supporting the likes of Kiss, Ozzy Osbourne and Whitesnake. 1985 saw the release of second album Rock Ain’t Dead but changing fortunes saw them dissolve in 1988, their final album The Big Bang being released the following year.

The band has reformed in recent years, and toured throughout the UK, while Gary Moat has moved the drumming stool and now fronts Burnt Out Wreck.

Best Of Heavy Pettin feature 14 songs, taken from each of their three albums (That were rereleased last year).

The album’s cover is a previously unseen photo by David Plastik taken in 1984 at The Louder Sound Festival in France, with other unseen photos showcased within, alongside liner notes from Ross Muir of FabricationsHQ.

The Best of Heavy Pettin and their previous albums are all available at Cherry Red/Heavy Pettin Reissues, as are affiliated band Burnt Out Wreck’s. Aside from their own two albums, Burnt Out Wreck has entered the real ale market, collaborating with Lymestone Brewery.

“When Claire reached out to us to collaborate with the band to produce a beer, we were more than happy to get involved,” said Lymestone Brewery’s Ian Bradford of conversations with the band’s management. “We love the band and the album so it’s a real treat for us to be able to do this together”.

Apparently the beer is not for the fainthearted! Three powerful US hops dominate this monster of an American Pale Ale. From its crisp Maris Otter base to its massive hoppy finish this is a beer that will have you on the edge of your seat… Handy for these self-isolating times then!

The beer is available now, and there are already plans to increase the range in the near future. To investigate this matter further we advised you to visit  Lymestone Brewery’s website here.