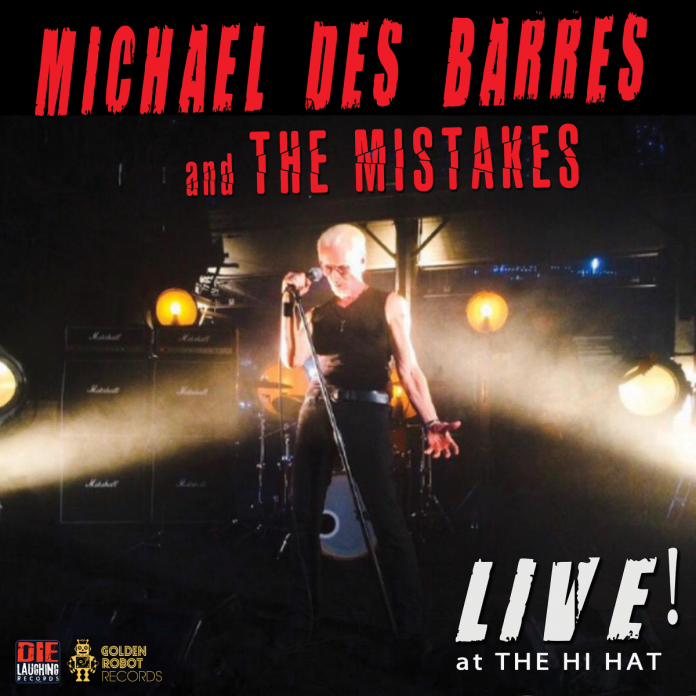 The 26th Marquis Des Barres is better known to some as the kid wearing sunglasses in the classic British b/w film To Sir With Love, then later a jobbing actor on American TV shows, primarily something called MacGyver.

To those of us who used to scour music store record bins looking for bands with underdog appeal Michael Des Barres was the front man in Silverhead and Detective – A manbestowed with looks and an attitude that Axl Rose would soak his nappy through to look half as cool.

Listening to this five-track live EP, he’s still acting like the kind of rock star he should’ve been in his youth, but gold discs aside, it’s about what’s inside: he’s a punk with a posh British accent and he still knows how to deliver a tune.

True, some of the songs are in a lower key than their original recordings, but Michael Des Barres continues to pitch and phrase, then holler and shout without dropping the baton. The hard-edged buzzsaw sound of The Mistakes has one thinking he’s hooked up with some young dudes, but the cover photo tells us different; like him they’re road warriors.

And so, it begins as the chords to Silverhead’s ‘Hello New York’ jaywalk across the stage following a long beefy drum roll. Its glam rock origins reined in a little as guitars slung low strike their own pose. Des Barres’ greeting continuously volleyed back with a “whoa-whoa” continues to hit the pocket and remains clear to me that it was the blueprint for Deff Leppard’s own ‘Hello America’, just better.

I was lucky enough to catch Peter Gabriel’s first ever solo tour, where short on numbers he covered The Kinks’ ‘All Day & All Of The Night’ and the most chilling cyberpunk version of Marvin Gaye’s ‘I Heard It Through the Grapevine’ you can imagine (Please, if there’s a bootleg, get me a copy). Here, Des Barres delivers Gaye’s ‘What’s Going On’ as if Bruce Springsteen was auditioning for The Kinks with a male version of The ShangRi-Las on backing vocals! It rocks hard, then seems to end with the bass player punking up Hendrix’s melody line to ‘Third Stone From The Sun’. Talk about mash-ups.

‘Get It On (Bang A Gong)’ is closer to the T. Rex original than the laid back funk Power Station cover, whose original singer Robert Palmer he replaced for live performance, including an appearance on Live Aid. Here’s Des Barres’ chorus vocals add a certain cocksure campness possibly not intended while a more neanderthal Stooges swagger plays underneath.

‘Detective Man’ begins like some alt. country rock ditty working its way into life. Low down, dirty and a little slower than the original with a slide guitar at work, and the whole affair getting ever more-sleazy and heading for one unrepentant drag racing car crash at the end. Yes, this one live is a far more feral beast than the slick studio recording for Swan Song Records.

Come the glorious, tacky and tragic mini-rock opera that is ‘16 & Savaged’ we’re offered a heavier rendition, with a little more mangled metal in the lead guitar lines before opting for more nimble-fingered Mick Ronson six-string pirouettes in the lighter sections. Michael Des Barres relating a paean to Hollywood Strip’s sinners then and now for its highs and lows of sex, drugs and rock and roll ain’t for the faint-hearted. His vocals rage, spitting out venom in their warnings, and comfort in their refraining counterpoint. Today the song is possibly more potent than ever.

Elsewhere our singer sneers away and we imagine, like Jagger and Iggy Pop, that despite his years, his snake-hips still shuffle with lothario lust. Full of himself and full on 24/7, his intelligence shines through, as does a sense of wit, well-placed phrasing and a lower-timbered vibrato that delivers.

Ending on a superfluous Rock N Roll Medley’ that covers ‘Good Golly Miss Molly’ and ‘Long Tall Sally’ it’s loud, lewd, a noisy disposable racket but high on energy and Chuck Berry licks. “Thank you so much. You’ve been lovely,” he announces in the kind of posh accent Freddie Mercury could only fake, before an unholy shot of feedback and a dirty roar of “Goodnight!”

Out now on Die Laughing Records, you can stream/buy Michael Des Barres and The Mistakes’ Live by clicking here… And you should!