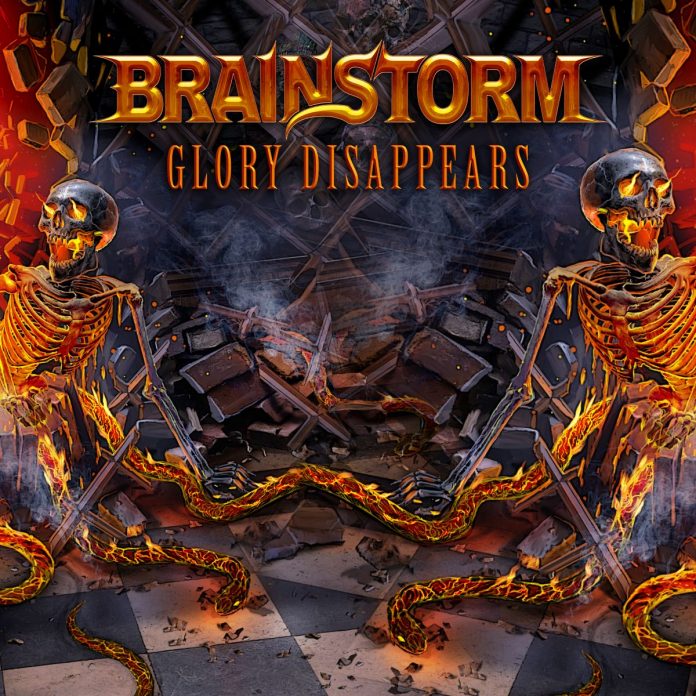 German band Brainstorm release new album Wall Of Skulls on 17th September, and will be taking a trip to play the Boston Music Rooms in London on 3rd October… But before all that, they’ve just released a new single in ‘Glory Disappears‘, that’s out now on AFM Records.

It is: “a song that is so different and yet so representative for the band Brainstorm. Slowly, solemnly and suffering we plunge into the doom with them,” apparently, and you can find out for yourselves by checking out the video for it right here at RAMzine.

Previous album, Midnight Ghost, released in 2018 was a musical turning point for the power metal act from southern Germany and saw the band members broaden their artistic horizons.

“When we released the recording, we immediately felt that we were holding probably the most important album in Brainstorm’s history in our hands,” explained singer Andy B. Franck. “Sales figures as well as audience reactions during the subsequent tour confirmed that impression. Our fans celebrated the new material as enthusiastically as they did our classics.”

That’s precisely the point where Wall Of Skulls picks up, taking Brainstorm’s musical concept even further. Franck talked of an “almost uncanny energy at the rehearsal room when we wrote the material. We’ve included more powerful and fast-paced numbers than ever before on this album. All that happened totally unintentionally and without a masterplan but in a completely natural way.

“We simply worked on the songs without compromises and never changed course once we’d embarked on a specific direction. So Walls Of Skulls is definitely not Midnight Ghost 2.0, but another and very obvious step in the evolution of our music.”

A development, coincidentally, that has in a way even benefitted from the crisis for the cultural sector during 2020, which was marked by countless uncertainties and public lockdowns. “It may sound paradoxical, but the Covid-related tour cancellations and postponed tour dates gave me time during the production of Wall Of Skulls to put things on hold that I wasn’t one hundred per cent happy with and start all over again.

“In May 2020 I started feeling like I was running in circles artistically, so I deleted lots of vocal cuts and started all over again six weeks later. As far as I was concerned it was important not to rush these songs but to get the optimum out of our creative power.”

The record also happens to be the first time the band has worked with two guest vocalists who assume a central role. ‘Escape The Silence’ stars Rage’s Peavy Wagner, while ‘Turn Off The Light’ features Orden Ogan frontman (and also Wall Of Skulls’ producer) Seeb Levermann.

“I’ve known Peavy for 15 years,” said Franck. “He’s a German metal legend, which makes me all the happier that he recorded a number for our album. As far as I’m concerned, his voice takes the song to another level. In contrast, the duet with Seeb on ‘Turn Off The Light’ has a haunting battle-type quality which highlights the album’s diversity.”

Wall Of Skulls album can be pre-ordered here.