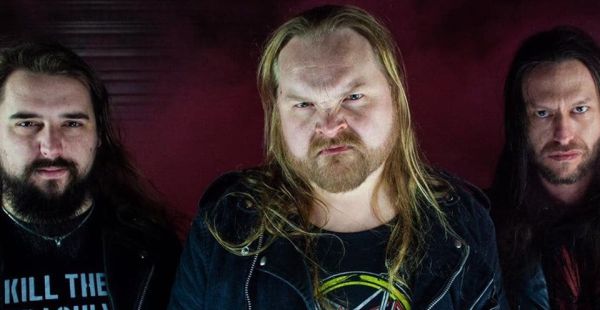 Backstage at Bloodstock 2021, we caught up with Suffolk-based thrash masters Elimination after their blistering set on the Jagermeister stage after taking the place of Master Blaster in the Bloodstock re-shuffle following travel chaos for some of the originally billed bands.

The guys chat about their upcoming album, plans for the future, and their hot take on the Thrash Metal genre and much more.

How are you feeling today, you’re all alright?

You were on the Jagermeister stage, it’s quite small but it packs a big crowd, how did it feel playing what I assume is your first gig in a year and a half?

It’s not actually! Well, it is for Ross but we’ve done a couple of hometown shows to promote the new album but nothing of this scale, but we got asked if we wanted to do Bloodstock and we were like, yeah! yeah, we do! To be fair, the Jager stage may be small but it gets a lot of foot traffic

Yeah, you’re right, technically you can have the biggest crowd at Bloodstock on the Jager stage as you’ve got the main stage crowd and all the surrounding people. From what I hear, this is your come-back tour if you will?

Kind of, so we started in 2007, released two albums then it got to 2013 and other members decided they wanted to go off and be adults, have kids, move to other countries, so we went on hiatus and it got to 2017, we got a couple of the guys back together to do a ten-year anniversary show. I wanted to carry it on but the others didn’t so I got Lee and Dave in to carry it on and we released an EP called Gods & Beasts last year and this year we’ve got an album out on 29th October, Echoes of the Abyss, so yeah, we’re basically going from strength to strength building on that.

So what’s Echoes of the Abyss going to sound like? Is it going to be like your old stuff or something totally different?

Thrashy! Yeah, the album sounds huge, it’s thrashy, there are other little influences in there as well, but that’s what happens, bands have to evolve a little bit but basically you’re going to wreck your necks to it and it’s going to sound fucking huge!

As one of the only people to listen to the album this much as a whole, it’s great thrash but there is a lot of good riffs in there and a lot of melody parts, so thrash and then some, to me there’s a lot of stuff in there that’s not just generic thrash and it improves as I listen again and again and again.

So you don’t want to be labeled as just thrash?

Yeah, it’s all metal, there will be some people out there though who are like “Actually it’s this…”, some people’s hobby is to make up sub-genres, but like you said, it’s all metal, it’s all rock n roll! So is this the direction you’re going to go in, are you going to carry on doing thrash?

Still carry on doing thrash, obviously, we don’t know what the future holds but yeah we’re a thrash band and the futures always going to be rooted in thrash metal, there’s now “Load” album planned, we’re not going to start wearing mascara and start playing county and western, don’t worry.

Haha! With all due respect, I like those two albums just not as Metallica albums…

Yeah, yeah, I like them they are just so different it doesn’t quite feel right, it doesn’t tickle that pickle… I think if they were released under a different name like if some alt-rock band released they would be awesome, but I think as Metallica released them it just wasn’t the same.

You’re not going to do a “St Anger” either no?

Haha! No! No trash can snare drum, no, no unfortunately not…

The thing is, Thrash is kind of a retro thing now. I mean, there are a lot of bands around now but most people throw back to the ’80s, do you guys think it’s a retro thing?

I think we’ve got a huge amount of Thrash kicking around at the moment that’s obviously hugely inspired by the 80’s like you’ve got Shrapnel, you’ve got Gamma Bomb and guys like that are just fucking doing it and it’s not the same, it’s not like listening to “Ride the Lightning”, it’s obviously heavily inspired by that and I wouldn’t say it’s a dead sub-genre, I think it’s going places.

So what’s next after the album then?

Probably a tour, I think we’re going to get this year out of the way, release the album and see where we are, once we know what’s going on we want to get out on the road and just play shows, play loads of shows!

So any promoters out there drop us a line!

So any advice for anyone out there? You’ve been in the business for over ten years…

Persistence, don’t get discouraged at the first knockdown, learn from it and keep going! Oh and get a PR guy, that’s another great piece of advice, we know so many bands that are great musically but they have no idea what they are doing in terms of promoting themselves, and if you want to get anywhere you need someone who knows it, if you’ve been sat learning an instrument then you’ve not been sat learning what you need to do to promote yourself so find a good PR guy.

Yeah that’s right, you need to have a good business brain behind it all

A huge thank you to Elimination for taking the time to catch up with us. Be sure to check them out at the links below.

Special thanks to Jay Brown for help with this piece.