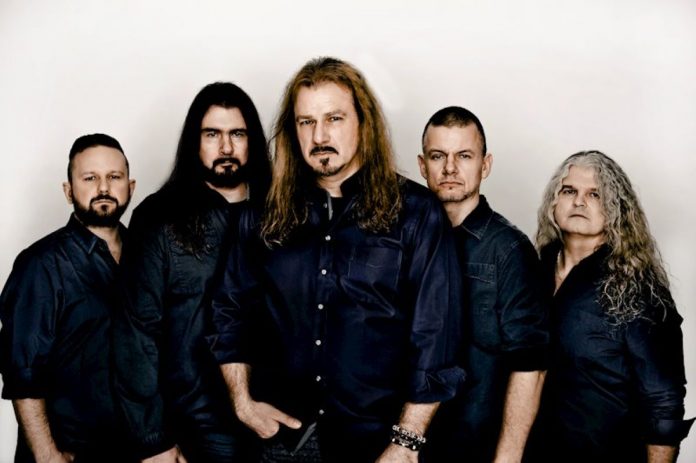 Wall Of Skulls is the new album due from Germany’s Brainstorm but it’s not out until 20th August 20th through AFM Records. A single, ‘Escape The Silence’, taken from the album, and guesting Peavy Wagner from Rage, was out back in March though, and they’ve just released the follow-up ‘Where Ravens Fly‘.

The song is said to feature “extremely melodic finesse culminating in a catchy chorus that inevitably fascinates the audience,” and you can judge that for yourselves by checking out the official lyric video here at RAMzine.

Wall Of Skulls was mixed and mastered by Seeb Levermann, of Oden Ogan, who also guests on ‘Turn Off The Light’, another track on the album. The full listing being as follows: ‘Chamber Thirteen’, ‘Where Ravens Fly’,’ Solitude’, ‘Escape The Silence’, ‘Turn Off The Light’, ‘Glory Disappears’, ‘My Dystopia’, ‘End Of My Innocence’, ‘Stigmatized (Shadows Fall)’, ‘Holding On’ and ‘I, The Deceiver’.

Previous single ‘Escape The Silence’ was the first time ever the band had worked with a guest vocalist who assumed a central role in one of their songs. “A outrageously great song with a stunning video. It’s an honour for me to be part of that album. Such an excellent track and awesome piece of music!” said Peavy on his contribution to the single. You can also watch the official video to that one here at RAMzine.

The band’s previous album, Midnight Ghost, was released in 2019, and proved to be a musical turning point for this power metal act from southern Germany, finding the band members reach a higher level of quality and broadening their artistic horizon further. “When we released the recording, we immediately felt that we were holding probably the most important album in Brainstorm’s history in our hands,” said Franck of that album.

That’s the point Wall Of Skulls is said to pick up from. Franck talked of an “almost uncanny energy at the rehearsal room when we wrote the material. We’ve included more powerful and fast-paced numbers than ever before on this album.

“All that happened totally unintentionally and without a masterplan but in a completely natural way. We simply worked on the songs without compromises and never changed course once we’d embarked on a specific direction. So Wall Of Skulls is definitely not Midnight Ghost 2.0, but another and very obvious step in the evolution of our music.”