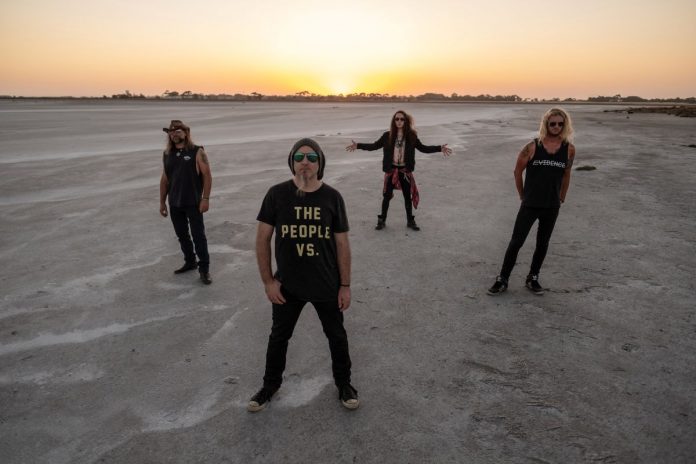 Melbourne-based alternative hard rock four-piece Cicadastone deliver music that packs a punch. With an old school 90s influences and a slick modern edge, the band has found its own space in the grunge rock genre.

The band has a new single out going by the title of ‘Incandescent’, and it is available on Golden Robot Records.

‘Incandescent’ is a song about sinking to your lowest and eventually finding your way out. To find that inner glow or strength to believe in yourself again. To pull yourself out of that hole and push forward. Slowly, burning, feeling incandescent.

You can stream the single here and check out the official video right here at RAMzine.

Formed in 2013 by brothers Mat and Mark Robins, Cicadastone has spent the last few years honing their sound and live show, as well as constantly writing. Their debut album Chance Collide came out in 2016, then in 2019 they signed with Golden Robot Records for second album Cold Chamber that came out last year.

The new single is from their Cold Chamber album, and the track ‘Red Eye Raven’ also from it came out as a radio single previously.

‘Red Eye Raven’ is a song about perception. It’s about how you see yourself verses how others see you, and the ultimate struggle of self-acceptance in an unaccepting world. To compromise who you are and what you stand for… Do you just accept it? When you feel life pressures are building, the red eye raven is slowly circling in.

Tracks featured on the March released album are ‘Red Eye Raven,’ ‘Slave In A Cage’, ‘Incandescent’, ‘Out Of Sight’, ‘Dying In Sunshine’, ‘Burden That You Wear’, ‘Call It What You Will’, ‘Box Of Anger’, ‘Cold Chamber’, ‘Dime A Dozen’, ‘X-Rays Of Our Minds’, ‘Slow Motion’ and ‘Down River’.

Cicadastone’s Cold Chamber  has been described “a musical landscape of twists and turns”.

The two LP black vinyl edition features two additional live acoustic tracks (not available on the CD or digital version of the album). You can listen/buy ‘Red Eye Raven’ here, Cold Chamber here, and watch the videos to their previous singles, ‘right here at RAMzine.