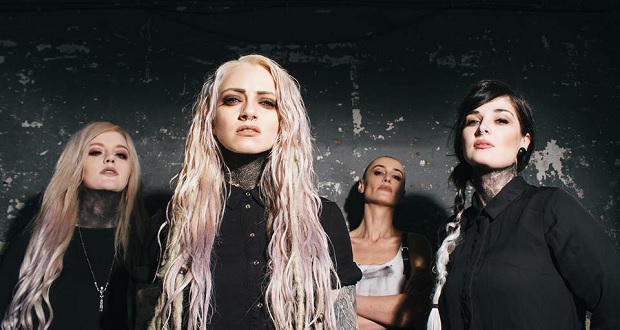 In the run-up to their forthcoming EP ‘Better Safe Than Sober’ doom-pop four-piece Courtesans have revealed the new video for ‘Mesmerise’.

The band premiered the video via Kerrang! and had this to say:

“‘Mesmerise’ is about being entranced so deeply that you lose yourself and forget who you are … You want this. You believe you need this. It becomes your first thought in the morning and the last thought before you fall asleep. You lose your identity. The desire fills your dreams and finally becomes you.”

The all-female band went on to say:

“The new video is dark meeting light, it’s disturbing yet liberating. We want more women to pick up instruments. Be musicians, tour managers, sound engineers etc and say f**k it! Don’t leave it up to the boys, but do not dumb down your femininity to be respected, be yourself and be free! We want to not only encourage women in music but for more men to accept that it is ok to look up to female artists.”

Courtesans are on tour in February and March:

The EP ‘Better Safe Than Sober’ is released March 31st.