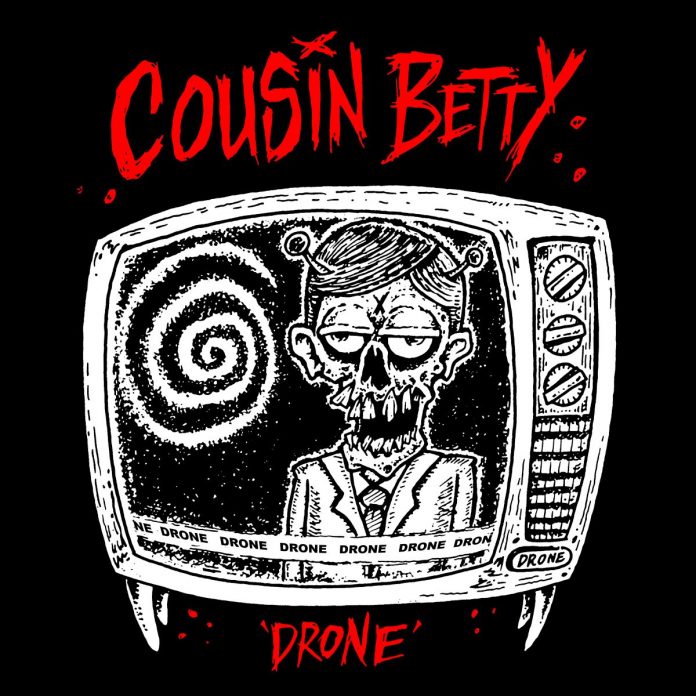 Cousin Betty is the brainchild of Damien Stofka a guitarist/songwriter, who has created riffs and written songs for Molten Universe, Death Mattel, Litter and various other projects over the last 15 years.

An EP titled Left was release under the Cousin Betty moniker in March, through Golden Robot Records, but either side of that there has been a plethora of singles.

First up was ‘Drone’ back in October last year. It has been described as “a meaty slab of distorted, psychedelic, influenced indie desert rock” and came about as Stofka is less interested in a standard line-up and the logistics required to be in a functioning band, while also inspired by the  Desert Sessions.

To this end, he tend to compile albums worth of material with contributing artists and performers he likes.

From these sessions, micro-bands would form to present these songs live; touring with such bands as The Psychotic Turnbuckles, Doc Neeson and The Lime Spiders – Having also used their rhythm section to record with. While the recordings have featured several musicians, the core live line-up has comprised frontman Matt Downey (Death Mattel) and rhythm sections comprised of Pat Walker (Ohms, Methusela), Tony Bambach (Lime Spiders, Aberration), Ged & Tom Corben (Lime Spiders) and Chris Drane (Cash Savage, Cherrywood). The line ups and shows have varied for each tour to include a DJ, visuals and themed stage sets

“Damien played me a riff he’d been working on; it was immediately infectious, but I wasn’t in the mood. I was upset about some Facebook friend just regurgitating some stuff – Obvious garbage they’d heard on in the media and seemingly verbatim. As I scrolled down their page, I realised that their politics, faux ideals and very life’s philosophy seemed the be simply illustrated through bad memes; some in direct contradiction to the one prior.

“While I’m an advocate of independent thought and am pleased that we don’t all think the same, this hollow person represented to me that type of fool with no fixed opinion about anything, opposition for the sake of opposition and a seemingly wilful ignorance. Not a problem in itself per se, but this dim prole was also a Dad…A mentor to a developing mind, ensuring further generations of the same. The lyrics spilled out and the entire song, complete with multiple takes and backing vocals was finished in about 40 minutes. On relistens I think I was pretty harsh but it’s just what I was feeling at the time. This was our first real collaborative effort too. I loved it the second he showed me the opening riff.”

You can order ‘Drone’ here and check out the official video right here at RAMzine.

Cousin Betty followed this up with ‘Tape Hiss‘ that you can order by clicking here.

“When we were jamming this one, I just remember the energy it had,” said Stofka. “It really needed to be celebratory and communal – Something that people would want to sing out load together. I thought of examples like Kiss ‘Rock ‘n’ Roll All Night’, Queen ‘We Will Rock You’ and Twisted Sister ‘We’re Not Gonna Take It’.

“While we discussed those and other examples, it occurred to me that I couldn’t think of anything contemporary – since ‘Smells Like Teen Spirit’ perhaps, that was as much of an anthem. That’s when I decided to just make it about a period of anthems in general.”

You can also catch the video to that here at RAMzine.

The most recent single release has been ‘AWOL’. Again RAMzine gets to feature the official video, and vocalist Matt Downey takes up the story behind it.

‘’Damien had recorded this one and ‘Loan Sharks Of Love’ in their entirety before I heard them, at the time we’d been toying with the notion of compiling songs themed around war and battles. It prompted me to write about my grandfather, a great man and a WW2 vet. Young tough and full of misplaced patriotic verve – like most of the boys his age, he left to fight whichever enemy Churchill deemed worthy of throwing troops at.

“In addition to being brave, he was also a bit of a renegade and spent quite a bit of time in various prison cells; some of which he’d been forced to build himself. A side of my grandfather few new, was his profound romantic streak; a characteristic perfectly demonstrated by going AWOL before deployment just so he could marry his sweetheart.

“They married, he returned for court martial, served a brief sentence for going AWOL and then deployed to the sands of Egypt to shoot at bad guys. The tragedy of this romantic gesture, is that my grandma once told me that the man who came home to her, wasn’t the same man she married. The horrors of that all he’d seen and lost had left substantial scars. Still, beyond his occasional irritability and, rarer still, displays of rage, the spontaneity of his wedding and heroism of knowing how much trouble he’d be in, is the story that best serves my memory of him.’’