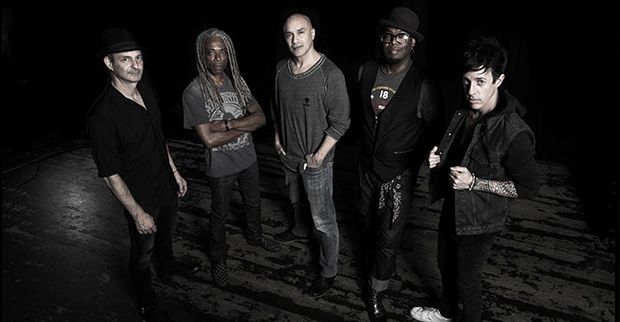 The Dan Reed Network are back and they have just released an official music video for their new single ‘Divided’,  the first single taken from their brand new album Fight Another Day that’s due for release on Frontiers Music Srl on Friday 3rdJune.

Originally formed in Portland, Oregon, Dan Reed Network packed out local clubs from late 1984 through 1986 with an infectious mixture of hard rock, funk and soul before the big time beckoned.   Supporting the likes of Bon Jovi and The Rolling Stones as they put out albums recorded by the industry’s top producers and recording singles that hit the US Billboard Charts, they decided to call a halt to things in 1991, as they became disillusioned with the record industry of the time.

Fast forward to New Year’s Eve 2012 and Portland, Oregon where it all began and the Dan Reed, Dan Pred, Brion James, Melvin Brannon II and Blake Sakamoto, the original members of Dan Reed Network had reconvened to play a 25th anniversary reunion show. Finding it “incredibly fun” to be back together they headed to Europe performing sold out shows and have played selective shows since.

“It’s been 25 years since our last studio album The Heat was released, said Dan Reed, “and to be honest, I never envisioned making another DRN album despite countless people encouraging us to do so. With a mixture of fate and a collective of trusted friends and supporters in the business coming to the table, I’m excited to say we are poised to release a brand new record entitled Fight Another Day on Frontiers, home of many artists that we in fact admired back when we were first hitting the scene and before.”

The album will be supported by a European tour in June, including a performance at the Sweden Rock Festival on June 10th, and an album release show at London’s 100 Club on June 15th.