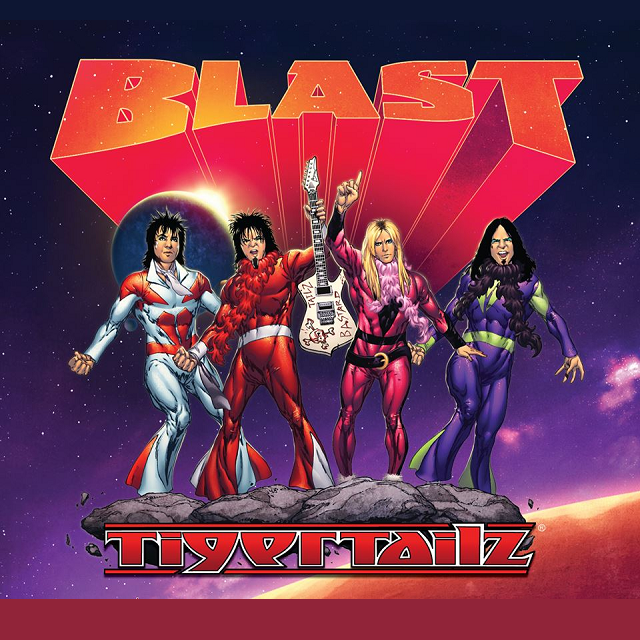 Ever since their 1990 album titled “Bezerk” the Glam-tastik Welsh band TIGERTAILZ have deteriorated faster than a loaf of crusty French bread eaten in a warm bath.

It is not just that the kids these days are not into gaudy glitter any longer… No, it’s also because glam music is all about style ‘n’ pose over substance. And that kinda thing dried out when The Aral Seas finally cracked over… The fashion melted away with the last free-floating iceberg.

Poor Pepsi died in 2007 and the band fragmented before our eyes. But the fan-base (groupies are known as Maniacz ) are a loyal tribe. And the band are more-than just merely resilient. They are miracle workers!

In 2016 they plan a host of UK and overseas BLAST OFF tour dates, maybe even another KISS Kruise. Who knows? Plus the release of “BLAST” a fresh album with their not entirely new line-up. Founder member and guitarist Jay Pepper is joined by vocalist Rob Wylde, long-time drummer Matt Blakout and a new bassist Berty Burton. They aim to stimulate renewed interest in the Welsh glam metal scene.

We had a listen to Blast —

The album starts with the twisting spirals of an Oriental market before “Just For One Night” flashes into view like bad taste neon in a brothel window. Apparently, this must have been written while the band were feasting on ultra-thick slices of honey bread. Because it is a heady mix of green tea, gunpowder, unsalted butter, and commercial hype. The pace is not so much head banging as tush wiggling. And that may — or indeed, may not — be your thang!

“All The Girls In The World” is next. Whoa! Whoa! Neither Cheap Trick, nor Kiss has ever written anything so lite as this. The riffs, if that is what they are, are back-combed and over-honeyed (again) and the mood is flashier than a bunch of lighters being used in a one-hit down-town bong shop. The easiest comparison one can make to this sound is very early Europe — i.e slightly bubblegummy and definitely over-poodled. The Tigertailz team might not have the greatest voices in history, but I suppose that there’s enough melody here to cheer up your mother’s aunt in a church hall wedding disco.

“Pipped It Popped It” has already been released as a video. The premise is that this song is a failed Eurovision Song Contest entry. Even the video appears to be dated … as if it was found in the BBC archives. Now this song could bring a smile to a grumpy face. You might even smile weakly yourself, for a second. But it is at this point that I need to be honest about it…

Irony should be the art of gently poking fun at something that needs an injection of humor. And, in this case, the credibility of the Eurovision, as played by a bunch of insanely unfashionable glam pop-stars has actually been done… For real. And I remember it as if it was yesterday. The band was called Black Lace. And it was in 1979. I still wear the scars.

Black Lace were, without any exaggeration at all, the worst band in the world. Ever. Their biggest hit of all “Agadoo” still makes me vomit. So Tigertailz don’t need to be ironic about glam pop — even less about Eurovision — because both of those institutions have already managed to parody themselves more-or-less into extinction.

Now, if Tigertailz had picked on and parodied Marilyn Manson or, better yet, Babymetal then I might have approved. That would have been different… But of course that would have taken imagination, ingenuity and more talent than they possess.

Since we are thinking about Black Lace and crimes against humanity, then we should also consider taking into consideration the track titled “Crime Against Rock And Roll.”

This number struts like a street floozy toting herself in fake Dolce & Gabbana during happy hour at the Frolic Room bar on Hollywood Blvd. But funny enough, I quite like it. This is much more my style. It’s cheap, tarty, vulgar and fun. Naughty it might be, but it’s also kinda nice! Yes, I know that the guitar-work is less Van Halen and more Van-Horn-note… but this tune lights up my chemicals far quicker than anything else on this sub-par album.

Sorry guys, once you were trash, but at least you rolled. Now you have contracted blandular fever.

Maybe this will do for shameless glamnesiacs out there — but I prefer something that’s more legitimate. Reckless Love or something by Quiet Riot. Perhaps.