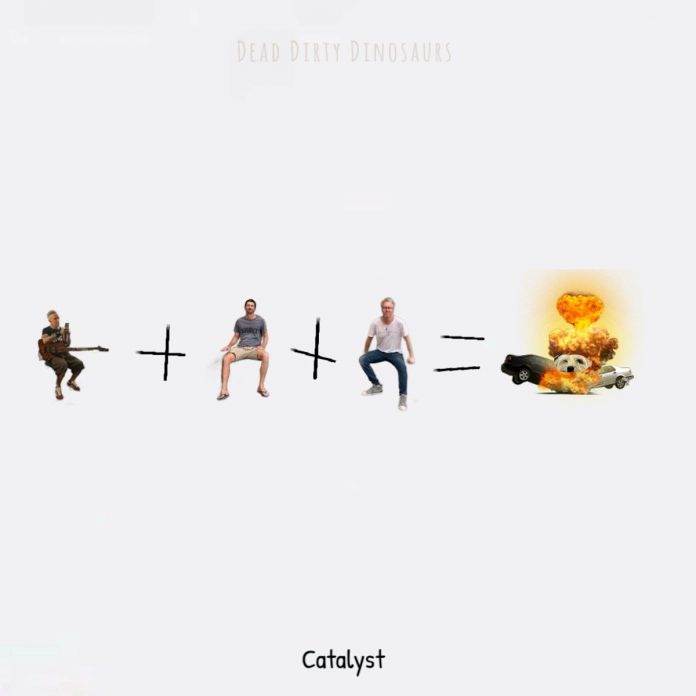 Hot on the heels of their recent single ‘Delirious’, Australian punks Dead Dirty Dinosaurs stomp towards us with release in ‘Catalyst’ that’s due out on the 8th of September through Riot Records.

“Catalysts generally react with one or more reactants to form intermediates that subsequently give the final reaction product, in the process regenerating the catalyst,” the band tells us knowingly.

Their September single is intended as a catastrophic reaction to the conventions of music as we know it. These underrated outsiders are the ‘Catalyst‘ between you, everyday life and the answer to a question you didn’t even know you were asking. From the maniacal count in, to the last of the ringing guitars, you might just be begging for more!

You can watch the video for ‘Catalyst’ right here at RAMzine and it can be purchased here.

Cantankerous troubadours, Dead Dirty Dinosaurs have been pouring blood, sweat and tears into their music, with the intent being to leave you smiling.

They tackle today’s endless stream of daily calamities and staying positive through it all. indeed, the Dead Dirty Dinosaurs’ songs of love, life, dubiously deadly careers and a sly look at our wild surroundings, all throb with the “night out” energy that we’re all craving right now.

‘Catalyst’ is the third release from the band this year.

The EP Too Many Questions: The Abbey Road Masters (Remastered) came out back in March, and last month came the single ‘Delirious’ – A fast-paced chunk of indie guitar pop from the Brisbane band that told a story of undying love and the joys that come along with keeping those flames burning.

You can order ‘Delirious’ here and also watch the video to it right here at RAMzine.