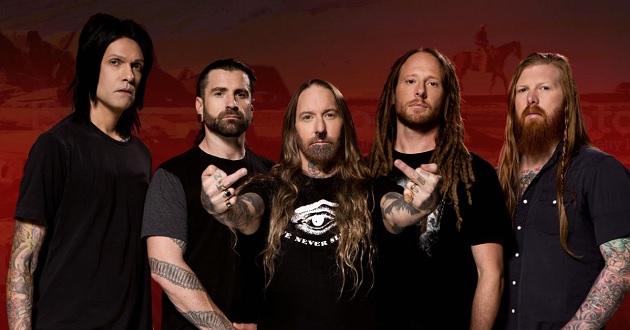 DevilDriver have released a Lyric video for the track ‘Copperhead Road’, which features 36 Crazyfists vocalist Brock Lindow. This is a cover of the 1988 track by Steve Earle.

The band are set to release their new album of outlaw country-gone-metal anthems, appropriately titled Outlaws ‘Til The End: Vol. 1. The album will feature collaborations between Hank Williams III, of the punk metal band AssJack, Randy Blythe & Mark Morton of Lamb of God, Lee Ving, of Fear, Wednesday 13, and Burton C. Bell of Fear Factory to name a few.

Using a mix of genres rarely heard together, the style is unique and fans have had differing opinions, take a listen below.

DevilDriver have recorded a series of commentary videos published on YouTube explaining the meaning behind the album. The talks also feature the guest artists and offer an interesting insight into the creative thought process behind the album concept and how Country music has influenced each of the artist’s throughout their careers. The set of videos also features talks on The Cash Cabin and whether the band will be taking this album to a live audience. The videos can be viewed through Napalm Records channel here.

Discussing the idea behind the album, frontman Dez Fafara is quoted as saying; “We should do a cover record, and we should do something no-one else has really done… We should cover Out-Law Country and do it as heavy as Balls … I just think metal needs shaking up really, so we wanted to do something different”.

Outlaws ‘Til The End: Vol. 1 has been described as “one of the most invigorating records the band have made to date” it features some Big name collaborations, and not to mention has been produced, mixed and recorded by Steve Evetts, best known for his work with Dillinger Escape Plan, Every Time I Die, Sepultura, and The Cure, with co-production by guitarist Mike Spreitzer, the album is definitely a break from the norm.