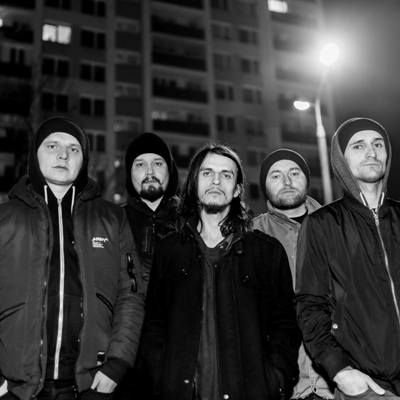 Dom Zly translates as “Bad House” in Polish, and it’s from Pulawy in that country where the band formed in autumn 2016. Featuring Krzysztof D (vocals), Grzegorz N and Lukasz W (guitars), Mariusz A (bass)and Grzegorz K (drums) who are also members of bands like Kaldera, Hidden World, The Feral Trees, Weedcraft, Panacea and Words Mean Nothing.

Commenting on their music the Dom Zly collective stated: “The inner need to express one’s self about everyday realities surrounding us was the main reason for starting this project. The climate of the music is the result of the band members’ common fascination with alternative music and its broad horizons; inclined more towards the heavier or extreme side.”

Featuring cover art by Kuba Sokólski, the EP was mixed and mastered at Satanic Audio and features  ‘Bor’, ‘Psy’, ‘Tramp’, ‘Dom Zly’, ‘W Noc’ and a sixth unspecified track. Featured here at Ramzine is an official video for ‘Psy’ by Dom Zly.