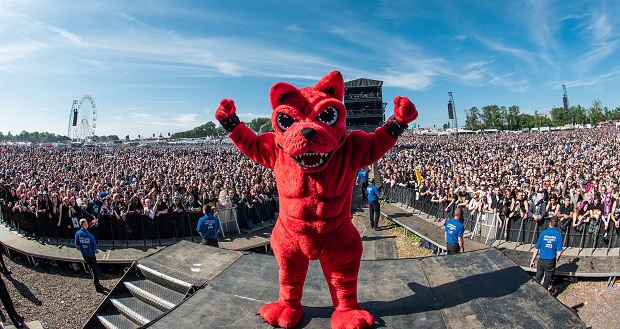 Only a month to go until the world’s premier rock event, Download Festival, welcomes 100,000 fans to Donington Park.

This year’s line-up is certainly one for the ages with headliners Slipknot, Def Leppard, and Tool – as well as legends such as Slash, Whitesnake, The Smashing Pumpkins, and the final UK performance of Slayer.

As most experienced Download patrons will testify – it’s not all about the bands. A good time is had by all with Download’s alternative entertainment including comedy, wrestling, and much more.  As announced earlier this year – Download will host WWE’s British territory NXT UK with stars like Pete Dunne and Toni Storm. Just announced are stateside stars from NXT: Adam Cole BAY-BAY, The Undisputed Era’s Kyle O’Riley, former Women’s Champion Shayna Bazler, and ‘King Of Bros’ Matt Riddle.

2019 will see the first ever Mind The Dog mindfulness initiative, plus the return of Do.om Yoga – re-enforcing Download as the UK’s friendliest festival.

If that’s not enough, you can enter the UK Air Guitar Championship. Entrants can choose to enter any of the six heats of the competition on Friday 14th-Saturday 15th June with a chance of going through to the finals on Sunday 16th June.  If you would like to enter you can download the form here, which are to be completed and handed in by noon Friday, June 14th.

Keep your eyes on RAMzine for news on Download 2019, as well as full festival coverage.