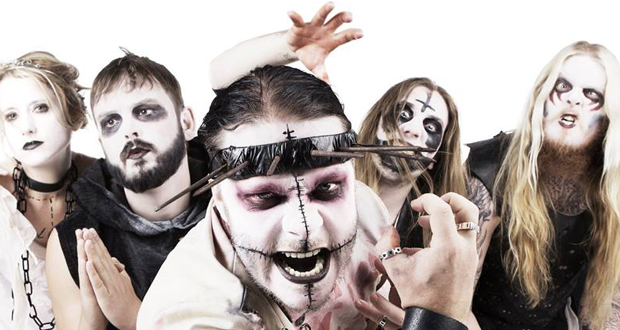 Evil Scarecrow have announced a series of upcoming shows, ahead of the release of their fourth album.

“We have some amazing one off shows to see out the rest of 2017,” said the band’s vocalist/guitarist who goes under the monicker Dr Rabid Hell. “It’s been a mind blowing year for us (again!). So we are going to celebrate in true Scarecrow fashion… Namely booze and getting silly with our crazy fans. We’ll be taking our full show to all of these dates.”

With Hell complimented by Brother Dimitri Pain on guitars, Kraven Morrdeth on bass, Princess Luxury on keyboards, and Ringmaster Monty Blitzfist, on drums, Evil Scarecrow will be playing the following dates:

“We are also really close in completing the writing of our fourth full studio album (as yet untitled),” added Hell. “In 2018 we’ll be back at the amazing Parlour Studios with our long-suffering (yet most excellent and legendary) record producer Russ Russell. Is that his real name? No-one knows. I’ve heard that his middle name is Rustle.

“Alongside the album launch which should take place sometime in 2018 we’ll be slowly rolling out a whole new stage show, to compliment our latest musical stories about martians or ghosts or robotic beer or whatever. We’re also working on a new video early in 2018 to support our new show and summer festival appearances (soon to be announced).” We kinda think you’ve been warned!