Flat Earth Know Who to Blame 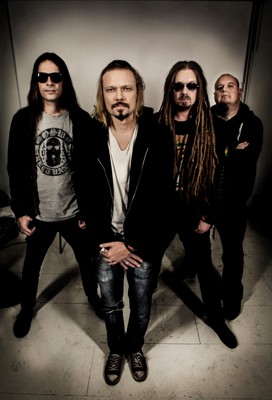 Featuring ex-members of HIM and Amorphis and newly signed to Drakkar Entertainment, Flat Earth have just released ‘Blame‘ their first single, with a debut album due later in the year.

Flat Earth features guitarist Mikko ‘Linde’ Lindström and drummer Mika ‘Gas Lipstick” Karppinen (both from HIM), alongside bassist Niclas Etelävuori (Amorphis) and vocalist Anttoni ‘Anthony’ Pikkarainen who was vocalist with Polanski. Their musical vision draws from the heyday of alternative rock while pulling in a variety of other genres without losing the thread in-between.

Flat Earth is seen as a new venture, not trading on past achievements and wanting to side-step any super group tags. The Finnish group are signed to Drakkar Entertainment worldwide, with the exception of their homeland where they will be represented locally.

“We are stoked to sign with Drakkar! We have been working on this album for quite some time now and are super excited that we finally can release the first Flat Earth album in Europe through Drakkar,” said Etelävuori “Can’t wait to get it out and get on the road and play again.”

On behalf of the record company, Jonathan Geschwill said: “We are very happy to have Flat Earth join the Drakkar roster because this band has a lot of potential and comes with considerable knowledge and skill. Both on a musical as well as on a personal level, it’s easy to see that these are musicians who have mostly been working professionally for more than 20 years in the industry. Finland has always been a good place for Drakkar in this regard and of course the goal is to establish the band as quickly as possible across Europe as well.”

Ahead of their album release you can check out their new single and watch the video for it right here at Ramzine.