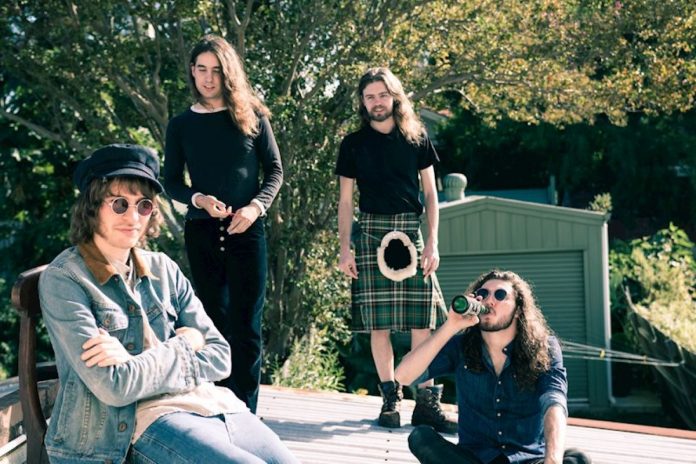 The four-headed Irish/Australian rock hydra that is Flickertail has released a video to accompany their current single, ‘Heroes (Live in the Studio)’ that’s out now digitally via Golden Robot Records.

‘Heroes (Live in the Studio)’ is the David Bowie hit as you’ve never heard him before. Word has it there’s: “Bouncing Motown bass courtesy of Matt O’Callaghan, Jonny Goldrick’s raucous Townshend-meets-Slash guitar playing and a powerhouse vocal performance from Liam Whelan.

‘Heroes (Live in the Studio)’ is taken from their upcoming Afterlife, the posthumous EP from Sydney’s premier retro-rock band. Five tales of kitchen-sink drama and ill-advised adventures recorded live in the studio. No overdubs or studio magic – just raw, unfiltered energy.

Formerly The Bitter Sweethearts, Flickertail draw inspiration from the likes of Thin Lizzy, The Dubliners, Airbourne and The Darkness.

The band honed their sound in the garages and booze dens of Sydney before hitting the road in 2015 to showcase their unique sound at every pub, club and back yard along Australia’s eastern coast

You can pe-save/ pre-order  ‘Heroes (Live in the Studio)’ here and watch the video to it right here at RAMzine.