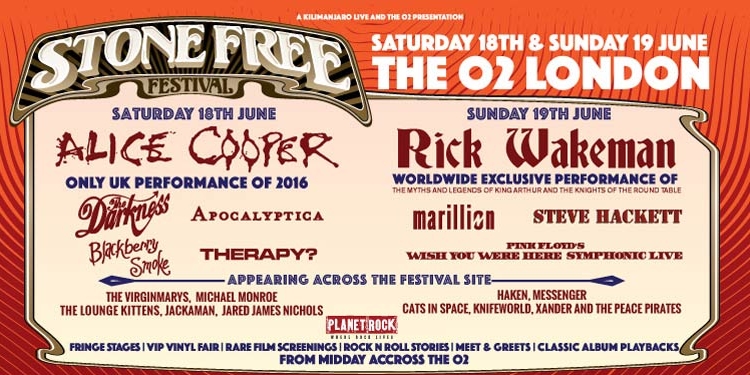 We’re not sure about you, but we are absolutely stoked when it comes to festival season and what a season it is shaping up to be.

Stone Free Festival comes to the O2 arena on the 18th & 19th of June for an absolute sizzler of a show that is sure to bring the house down.

Headlining the festival, Alice Cooper will be giving his only UK performance of 2016 and Rick Wakeman will give a world exclusive performance of his masterpiece ‘The Myths And Legends Of King Arthur And The Knights Of The Round Table’ for the first time since 1975.

In addition, the two-day festival will feature a variety of acts across multiple stages including at the indigO2. The Darkness, Marillion, Apocalyptica, Therapy? And many more will also be performing and the newly announced Speak Easy Lounge will offer an alternative for those who need a little time out to enjoy some spoken word performances including The Darkness hosting exclusive Permission To Land album playback and discussing their rollercoaster career as well as Alice Cooper in conversation with writer David Quantick

And as if that wasn’t enough, the classic rock vinyl fair will give those collectors an opportunity to say goodbye to their hard earned cash and hello to some brand new vinyl.

So what are you waiting for? Tickets are still available and can be purchased from the below links.

Day and Weekend and Rock Royalty tickets for