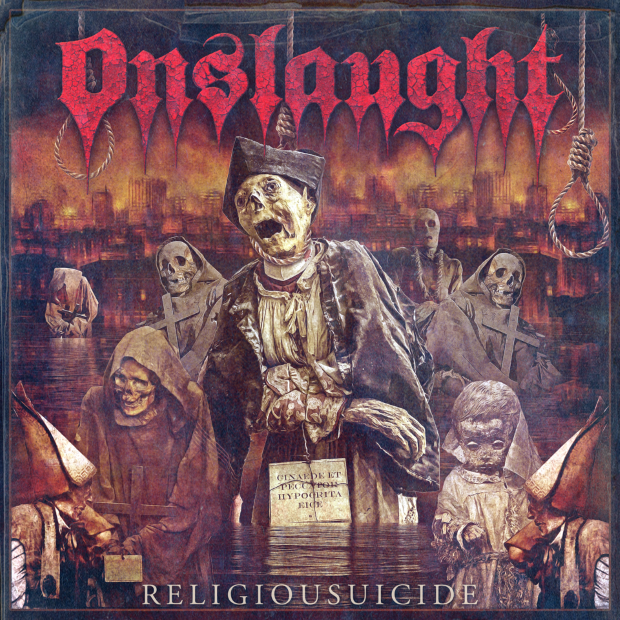 “Me and the guys are so fucking psyched to finally get this track ‘Religiousuicide’ out into the public domain,” said guitarist Nige Rockett: “It’s one of the most intense, hate filled songs that Onslaught has ever written and it’s definitely one for the pit!

“When Daniel Bergstrand (producer) asked me how we wanted the mix, I said ‘Can you deliver us one of the most brutal and aggressive sounds ever heard in thrash metal..?’ He said, ‘Yeah, sure, man!’ I gotta say he did an awesome job. I hope you all dig hearing it as much as we did for the first time!”

The album was mixed by Grammy Award winning producer Daniel Bergstrand (Behemoth / In Flames / Meshuggah) at Dugout Studios – Uppsala, Sweden and a follow up to the critically acclaimed VI.

Generation Antichrist was mixed at Dugout Studios in Uppsala, Sweden and features the following tracks: ‘Rise to Power’, ‘Strike Fast Strike Hard’, ‘Bow Down To The Clowns’, ‘Generation Antichrist’, ‘All Seeing Eye’, ‘Addicted To The Smell Of Death’, ‘Empires Fall’,’Religiousuicide’ and ’A Perfect Day To Die’.

“We’re stoked to ﬁnally get this new album ready to go” said Rockett. “Its been a huge challenge to get everything ﬁnalised in light of recent events around the world. We’ve had to bend a few rules and do things in very unconventional ways to make it work, but we got it done.

“I gotta say this is one brutal fucking record and could be a real game-changer for the future of Onslaught. It’s a very earthy and extremely raw sounding album, we held back on the technology, with natural drums all round and I think Daniel Bergstrand did an unbelievable job on the mix.

“Everyone really stepped up to the plate massively on Generation Antichrist but I have to single out our new vocalist Dave Garnett for smashing the vocals out of the park. It’s an unenviable task to follow in the big shoes of Sy Keeler but he’s made this album his own and in his own very cool style, I’m sure he’s gonna be hugely popular with the fans!”.

You can pre-order Generation Antichrist here.