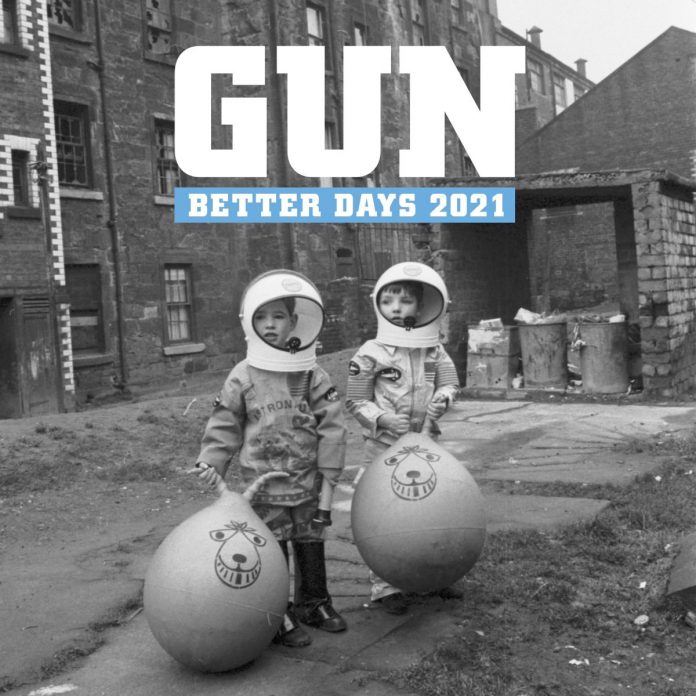 Glaswegian rock band Gun is back with a brand new single, ‘Better Days 2021’; taken from their eighth studio album The Calton Songs, to be released in March 2022.

Using the lockdown period to record at Morsecode Studios, the new semi-acoustic rendition of their debut single is part of an album of rerecorded classic tracks from the band’s catalogue performed acoustically and given a brand new lease of life.

Originally released in 1989, Better Days was the song that announced Gun to the world, and has been their call-to-arms anthem ever since. ‘Better Days 2021′ preserves the same energy while adding a fresh new dynamic, including backing vocals from the legendary singer Beverley Skeete, who has worked with The Rolling Stones and Pink Floyd amongst others.

The band hit the road in December, playing the Glasgow Barrowlands on 11th December, and The Lemon Tree in Aberdeen on the 12th December, before embarking on a full UK tour in March 2022. They also play on November 11th at the Cardiff Tramshed on November 11th (with The Dead Daisies), Planet Rock’s Rockstock Festival on December 12th, and Hard Rock Hell ABC on November 13th.

The band are known for their incendiary live shows, touring extensively over the years, notably with The Rolling Stones on that band’s Steel Wheels & Urban Jungle tours. Formed in 1987 in Scotland by Giuliano Gizzi, during their career the band has achieved three UK Top 20 albums and eight UK Top 40 singles, including their evergreen cover of Cameo’s ‘Word Up’, that reached the UK Top 10 and charted all over Europe.

Gun frontman Dante Gizzi said: “Along with everyone else we’re excited to put the past year behind us and play to the finest fans in the world this November and December, and go again next March. We’ve got a new album ready to go and we’re eager to play it for you guys. It’s been a very difficult and indeed scary time for us, but we can promise you Better Days ahead!”