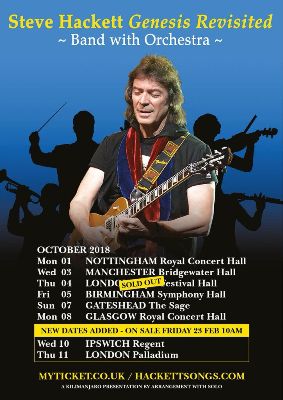 Following 2017’s sell-out Genesis Revisited tour, progressive rock artist and former Genesis guitarist Steve Hackett announced a special six date UK tour in October where he and his band will be accompanied by a 41 piece orchestra… However, shows are selling out already and Hackett has added more dates!

The decision to undertake this tour was made after the critical success of last year’s one-off US performance of the Genesis Revisited music with his band and the Buffalo Philharmonic Orchestra, as conducted by Bradley Thachuk who will flying over to the UK to conduct these new shows.

Hackett commented: “I always hoped that the Genesis music would one day involve an orchestra and I’m proud to say I’ll now be able to make that dream a reality on my next British tour, involving my own extraordinary rock band alongside a full-sized orchestra.”

The guitarist will be joined by his regular musicians Roger King (keyboards), Gary O’Toole (drums/percussion), Rob Townsend (saxes/flutes) and Nad Sylvan on vocals. For his tour the bass player with be Jonas Reingold from The Flower Kings.

Tour dates are listed below and tickets available by clicking here and at individual venue box offices.