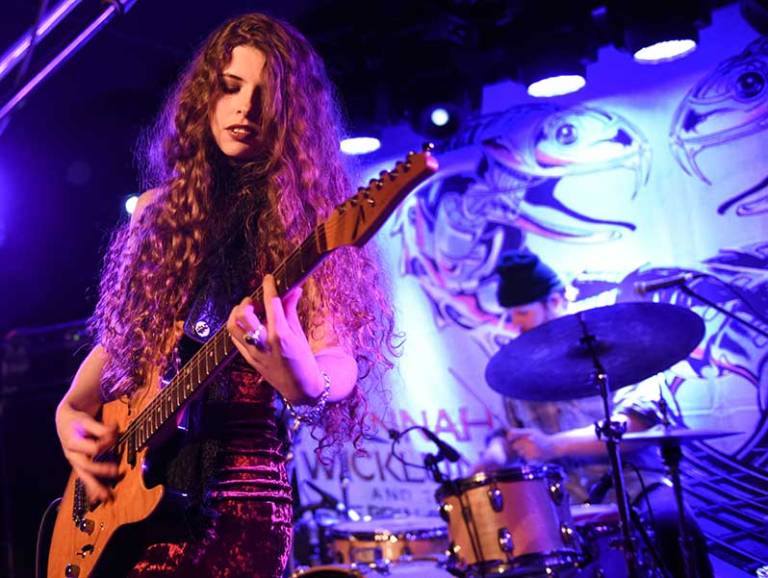 Hannah Wicklund & The Steppin Stones release their self-titled album in the UK on Friday 13th September through Strawberry Moon Records. It coincides with her Roadstars UK Tour alongside Gorilla Riot and the recently added Piston this October.

21 year South Carolina born Wickland formed the band back when she was only eight years old, drawing influences from the sixties through to the eighties. Already available in the States where it received rave reviews, this new album is said to a “fresh take” on the band’s guitar-driven rock.

“Once we started writing some songs, I saw that she had a real, raw talent,” said Producer Sadler Vaden. “I was inspired to work with her by her love of classic rock music and blues. I wanted to honour that in making this album, but also add a little modern edge to it.”

Song featured are ‘Bomb Through The Breeze’ – that was play-listed on Planet Rock when released as a single, ‘Ghost’, ‘Looking Glass’, ‘Mama Said’, ‘On The Road’, ‘Crushin’, ‘Strawberry Moon’, ‘Too Close To You’, ‘Meet You Again’ and ‘Shadowboxes And Porcelain Faces’.

Joe Bonamassa described her as “an aural kaleidoscope of lazing guitars and searing vocals” and Wickland’s said to resurrect  “spectres of Hendrix and Joplin” on this record. Pretty impressive feedback to receive.

‘Shadowboxes And Porcelain Faces’ is the new single, and you can watch the video for it right here at RAMzine. The singer/guitarist herself commented that “The lyrics can be interpreted in many ways, but for me it was meant to show how consumed by technology you can feel sometimes.” She continued: “Growing up in this day and age, there has been a screen in front of me constantly—especially during my last three years touring in the United States.”

Footage used in the video is from Cuba, where she spent a week was completely detached from her phone. “It was very refreshing to detox and I came back feeling a lot more refreshed and a big reason was because of the lack of a screen constantly in my face,” she noted.