Hookers & Blow Have it Covered 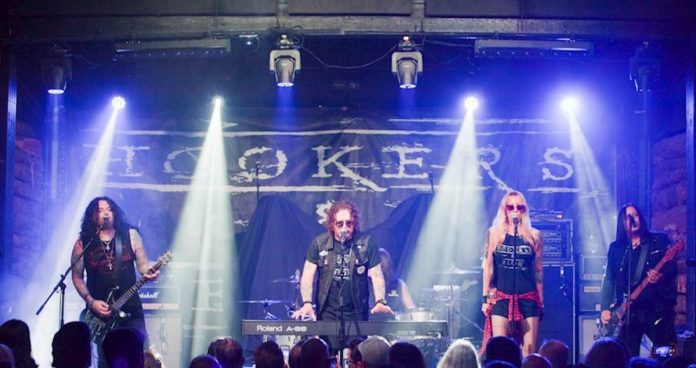 Hookers & Blow, the band project formed by long time Guns N’ Roses keyboardist Dizzy Reed and Quiet Riot guitarist Alex Grossi, spent time in the studios when they could last year during the ongoing pandemic crisis. The long-term intention of this was to record an album featuring covers of classic rock songs.

Well, they’ve succeeded in their mission and a self-titled album will be out promptly as of 23rd July, to be released through Golden Robot Records.

“If you had told me almost two decades ago when Dizzy and I first formed Hookers & Blow that we would have evolved into what we are today, I would have said you were higher than we were, but here we are,” said Grossi.

“This record is really special on many levels,” he continued. ”For us - as well as many of our long-time fans and friends. In many ways, it solidifies that we actually exist as a viable entity with an official and accurate documentation of the past 17 years. This isn’t just a collection of recorded covers, it’s a labour of love that we are truly proud of.”

“There it is. Take it.”  offered Reed. “We made the rock and you all brought the drinks to a thirsty band. This record is for the joy of rock ‘n’ roll music we all share and for the hope of more rock to come. And more drinks, I’m parched.”

Tracks featured are: The Rolling Stones‘ ‘Rocks Off’ and ‘Under My Thumb’, Led Zeppelin‘s ‘Trampled Underfoot’ and ‘No Quarter’ (Both featuring the late Frankie Banali of Quiet Riot), Eddie Money’s ‘Shakin’, David Bowie’s ‘Ziggy Stardust’, Body Count’s ‘The Winner Loses’, The Zombies‘ ‘Time Of The Season’, Tom Petty’s ‘American Girl’, Blue Oyster Cult‘s ‘Godzilla’ (Featuring The Okai Sisters) and The Beastie Boys‘ ‘You Gotta Fight For Your Right (To Party)’.

The band has already releasing five singles from the album, the last being their cover of The Zombies‘ late sixties classic ‘Time Of The Season’ back in February.

“We love The Zombies. Great band with a great name led by the incomparable Rod Argent and his keyboard wizardry,” remarked Reed on the single. “‘Time of the Season’ is an iconic song with a timeless message. It was our intention to try and honour them and all of that. To help get the word out and share the burden as well as the fun, the lovely Nadja picks up the lead vocals on this one,”

The first single Hookers & Blow released as a cover was Eddie Money classic ‘Shakin‘. The singer passed away in 2019 so never got to hear it but they endeavoured to give it “all the soul, honesty and depth of the original” but in their own fashion. you can click here to listen to the single.

An energetic and rambunctious version of The Rolling Stones classic ‘Rocks Off’ from the iconic double album Exile On Main Street followed. “If I had to pick one song to cover from The Stones, ‘Rocks Off’ would be it. Enjoy!” Reed said, and you can by clicking here or checking out the video right here at RAMzine.

An emotive, respectful version of David Bowie’s ‘Ziggy Stardust was next and Grossi commented: “‘Ziggy Stardust’ has been in the Hookers & Blow live set since our very first show 17 years ago. We are really happy that we were able to capture the vibe of the way we do it live in the studio.” You can listen to the studio single version here.

Led Zeppelin‘s ‘Trampled Underfoot’ was dedicated to their good friend and colleague, the late Frankie Banali, of Quiet Riot fame, who had passed away after a battle with cancer. A portion of proceeds from the single are donated to a suitable charity that you can donate to here.

“This song was added into our live set during our first residency at The Whisky A Go Go in 2013 for Frankie Banali (Quiet Riot) to come down and jam on,” noted Reed of the Zeppelin song. “When it came time to picking songs to cover for this record, naturally we had this one on the list, with Frankie on drums.’’ You can listen to the single here.

In the producer’s chair for these tracks was Alistair James, who worked with Joe Perry, Alice Cooper and Johnny Depp on the latest Hollywood Vampires album.

You can pre-order/save ‘Time Of The Season’ here.

You can order Hookers & Blow on CD, vinyl and digitally here, and on CD and vinyl from the GRR Store