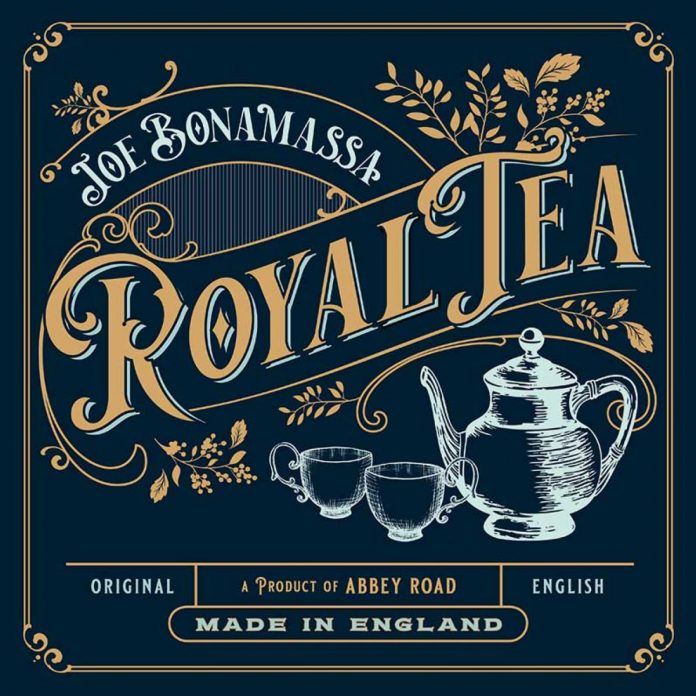 Joe Bonamassa’s forthcoming studio album Royal Tea was inspired by his British guitar heroes Jeff Beck, John Mayall & The Bluesbreakers, Eric Clapton and Cream. It will be released internationally as of October 23rd through Provogue/J&R Adventures.

The album was recorded at Abbey Roads Studios and was co-written with and a cast of homegrown notables including former Whitesnake guitarist Bernie Marsden, Cream lyricist Pete Brown and national-treasure piano man Jools Holland.

“Writing this record in London has done its job,” reflected Bonamassa. “It really does sound inherently British. Bernie and I, we finish each other’s sentences. We’re cut from the same cloth.” Bonamassa’s long-standing producer Kevin Shirley and regular touring band flew in for the recording sessions, and included Anton Fig (drums), Michael Rhodes (bass) and Reese Wynans (keyboards).

“This whole adventure,” admitted Bonamassa “was a bucket-list thing for me.” The album is said to reconnect the 43-year-old with the guitar-slinging kid from upstate New York, who stumbled across the best of British blues music in his dad’s vinyl collection – whose influences have shaped him to be the player he is today. “I would have been about twelve years old, and it was the sound I heard in my head. Like, ‘OK, I’m in. That’s what I want to be.’”

Coinciding with the announcement of Royal Tea’s release date comes the release of the guitarist’s latest single, ‘Why Does It Take So Long To Say Goodbye’. You can watch the video for it right here at RAMzine.

Alongside the announcement of the Royal Tea album, Bonamassa has revealed today that he will perform a special Livestream Concert from the legendary Ryman Auditorium in Nashville, Tennessee on September 20th.

This concert will feature songs from his new album before the official release. Having never performed a full, unreleased album for audiences like this before, it offers fans from around the world the opportunity to come together for an unforgettable night of blues-rock music. Along with Royal Tea he’ll perform classic remixes from his 20th anniversary album A New Day Now. The evening will continue with a one hour “After Party” featuring several live performances from an array of some of the hottest rising stars in the blues-rock music.

The livestream tickets and packages for Joe Bonamassa Live in Concert Worldwide presented by Keeping The Blues Alive are available by  clicking here.

Each ticket purchased for the live stream will raise money for fuelling musicians’ programmes to help artists in need, so it’s a laudable cause as well as an entertaining evening of exclusive live music.