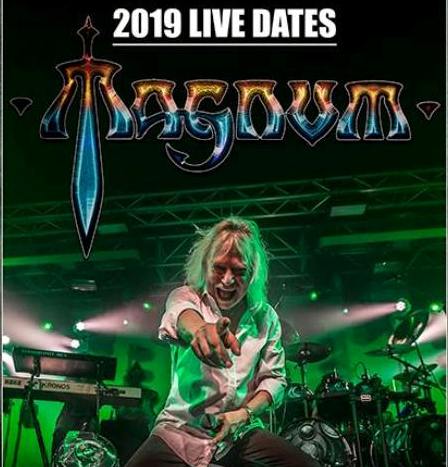 Currently on tour in Europe, Magnum will return to play more UK dates this summer.

Originally founded in Birmingham by guitarist/songwriter Tony Clarkin and vocalist Bob Catley, when local musicians got together in the 70s to play Snobs nightclub (still there to this day) they then too up a Friday night residency at The Railway (now the site of Birmingham City University) where they began to perform their own material.

Their hard rock and pomp progressive debut came out in 1978, the band achieving great success during the 80s, subsequently splitting then reforming and continuing to record and perform live to this day.

Aside from Catley and Clarkin, the current line-up features Al Barrow (bass), Rick Benton (keyboards) and Lee morris (drums). Former members having played at one time or another with acts such as Phenomena, Thunder, UFO, and most recently Kingdom of Madness, a live act featuring a number of former members.

Magnum themselves seem to keen to help younger Midlands based acts gain public exposure. Blues rock singer Rebecca Downes was special guest on their UK dates earlier this year, AOR band Icon Eye recently played dates with them in Europe and hard rock band Theia are lined up to support them in June.

The latter named band’s front man said: “We are very grateful for the opportunity and particularly thank Magnum for giving a lesser known band a chance to shine on bigger stages. We have long been fans of theirs and it will be a tremendous privilege to work alongside such professionals and to learn from them. Roll on June!”