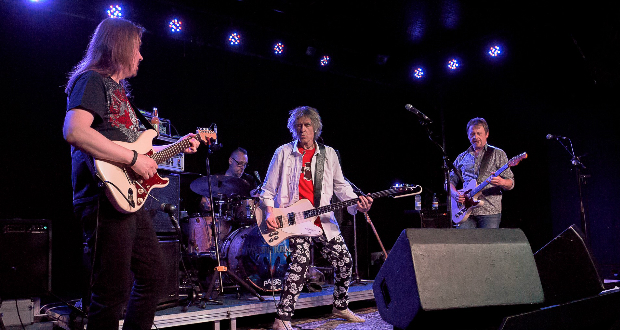 Martin Turner co-founder of Wishbone Ash has announced that he will play the band’s seminal album Argus in full on the last night of his current UK tour, at the Y Theatre in Leicester on 10th December.

The third album to be released by the band Argus was named Album of the Year in 1972 by the weekly music paper Sounds, reached No. 2 in the UK charts and became a gold record, taking the band from the college circuit to become an internationally successful touring and recording act, selling millions in their heyday.

Argus blended hard rock and folk with an added progressive rock dimension over a series of seven tracks, many with a medieval, come mythical folklore feel in its lyrical and melodic approach mainly supplied by bass player and lead vocalist Turner, the band’s original line-up at that time also featured drummer Steve Upton and guitarists Andy Powell and Ted Turner who’s twin lead harmony guitars would influence Thin Lizzy, Iron Maiden and others in the years that followed.

Alongside playing Argus in its entirety, Turner’s band – featuring Misha Nikolic on guitars, and Danny Willson guitars/vocals and Tim Brown on drums (both Leicester based themselves) – will also perform tracks from his latest solo album Written in the Stars” and a selection of other Wishbone Ash classics.

“We very much look forward to performing the whole Argus album during the show in Leicester as the last gig before the New Year which celebrates the 45th anniversary of the album’s release.  Hope to see you there,” said Martin Turner.