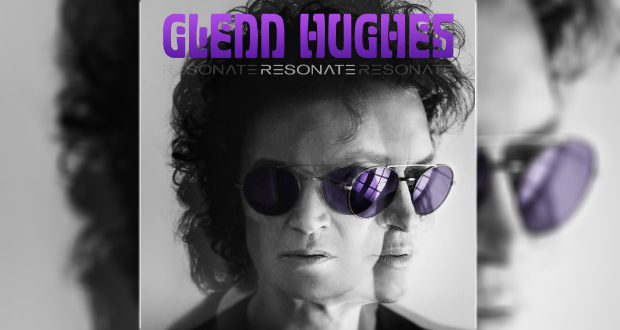 They’d have us believe Resonate is one of the heaviest solo albums Glenn Hughes has produced.  If we mean heavy as in metal, that lies with Addiction. If we mean heavy as in the hippy vernacular, okay, I’ll go with the flow. To be sure, there’s plenty of sturm und drang going on between the grooves, and mainly from that thwacking strumming delivery Hughes has favoured from guitarists during his bouts with California Breed and riffmeister Tony Iommi.

This time around guitar duties fall to Soren Anderson, and he’s a welcome addition having played a blinder when he toured the UK with Hughes a few years back. However, not all is plain sailing and there are a couple of shaky moments. The album opens with a hard driven chord run for first single ‘Heavy’ but its funk-lite verses require playing at full volume otherwise they sound rather lame. Replacing Red Hot Chilli Peppers drummer Chad Smith with Hughes’ regular live tubsmith Pontus Engborg the tempo picks up for ‘My Town’, Anderson tearing off a brief solo then inlaying choice rampant guitar figures between Hughes’ soaring vocals… But why he’s singing about alligators? They’re not indigenous to California. Cannock’s infamous for its paranormal sightings of strange animals but we didn’t hear any mention of those when he co-wrote ‘Homeland’ with Mel Galley for ‘94’s From Now On.

Anderson is also in the co-producer’s chair alongside Hughes and while they’ve opted for a more contemporary down-tuned rock guitar sound actual six-string soloing on the album is kept to a minimum in favour of new boy Lacy Doley’s keyboards. Anders Olinder who previously held that position live had been with Hughes a good many years, delivering a fine support and embellishing role but if this record is anything to go by, the deaths of long-time friends Keith Emerson and Jon Lord has caused the bass player/vocalist to reconsider that role and how best it can be applied to Resonate. Impressively is the answer.

‘Flow’ is an absolute epic.  Grinding slowly as if Trent Reznor were mixing Audioslave, three minutes in there’s a brief light section that takes us all the way back to Trapeze’s first folky-prog debut and later thunders towards its climax like ELP at their bombastic best, Doley stabbing away at his organ and Hughes impressing on bass. ‘Let It Shine’ follows and this time Doley’s synthesiser playing is reminiscent of Deep Purple instrumental ‘A’200’ while between the distorted bump and grind some choice harmonies and backing vocals support Hughes’ main soulful gymnastics. Lord is again evoked in the classic and majestic opening organ swells and runs of ‘Steady’ that then shifts between AOR hard rock and psyched-out soul, Hughes’ voice at turns in passionate aggression and passive lullaby, while his bass again wobbles nicely in prog mode, Anderson’s guitar squealing plaintively and Engborg’s tumbling drum patterns allowing the whole piece to flow from one section to the next.

‘God Of Money’ is another slow paced grinder but save for the flourishes during the keyboard solo is rather predictable both musically and its lyrical intent. ‘How Long’ is at turns angry, nonchalant, noisy and banal while also featuring some Purple Mark III type harmonies. On ‘Landmines’ Hughes croons coolly rather than opting for a piercing Harlem Apollo vocal rendition through the soul stirred ballad. The funk is then laid on in full measure for ‘When I Fall’ with an unexpected talkbox guitar solo slipping in pleasantly.

Final track ‘Long Time Gone’ opens acoustically as a song of reflection, moves musically in several directions yet never quite matches some of the more epic flowing numbers found on Resonate. Prior to it, however, is my favourite track not just on this album but from Glenn Hughes in quite a while. Not least because it’s just so different. ‘Stumble & Go’ is brash R’n’ B garage rock with American new wave vibe asides, the band singing in chorus over which Hughes excellently riffs vocally. My money’s on this track getting overlooked yet for me it’s the bees-knees!

Having followed the vocalist/bass player’s career for more years than I care to consider, Resonate is a diverse but rocky album. There are moments where he nods respectfully to his early career, ticks boxes in all the right ways with its highpoints, and still allows himself the odd challenge of going where his heart lies. People wonder how Hughes’ voice has held out after the rock star lifestyle he’s lived they should also start paying attention to what he’s doing with his bass these days. Live this band could be something special when they tour the UK in 2017.