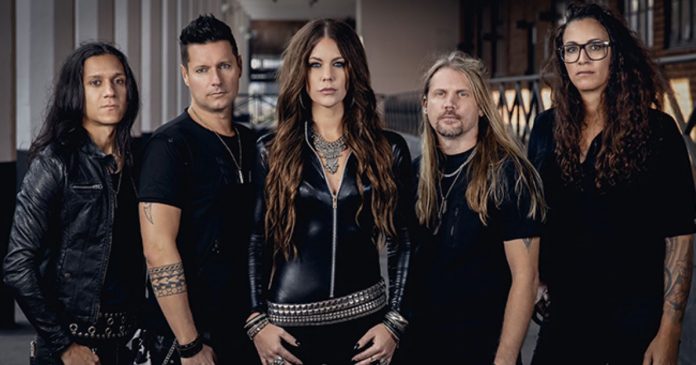 Swedish power metal quintet Metalite return with a new album, A Virtual World, due out 26th March 2021 through AFM Records.

Barely even a year and a half since they returned with their new singer Erica Ohlsson – Who brought in a massive amount of energy and musicianship to increase the impact for the new warriors of modern metal – trendsetting, epic, and of the highest quality, the band is surging forward.

The band returned to the rock dancefloor with ‘Peacekeepers‘ taken from the new album, followed that with the title track, and now issue ‘Cloud Connected‘ as a single.

You can watch the videos to all these singles right here at RAMzine.

As with previous album, Biomechanicals, the Swedes continue to make use of electronic elements, influenced by the trance era of early 21st century: spheric layers mixing with vibrating sequences and pulsating beats fitting like a second skin for the massive, melodic and outrageously catchy wall of sound.

“We see ourselves as a modern band that works differently than most of the Melodic Metal bands out there,” said guitarist Edwin Premberg.

It’s a musical formula that’s working for the band and the niche they have found for themselves. Songs with catchy hooks empowered by a base of sweeping synths and held together by a voice simultaneously strong and light at the same time.

A Virtual World will feature the tracks: ‘A Virtual World’, ‘Cloud Connected’, ‘Talisman’, ‘Beyond The Horizon’, ‘Peacekeepers’, ‘The Vampire Song’, ‘We’re Like The Fire’, ‘Artificial Intelligence’, ‘Alone’, ‘Running’ and ‘Synchronized’.

The album was produced by Jacob Hansen (Volbeat, Amaranthe) and will feature cover art by graphic artist Jan Yrlund of Darkgrove Design.