Electric Boys are back to turn things Upside Down 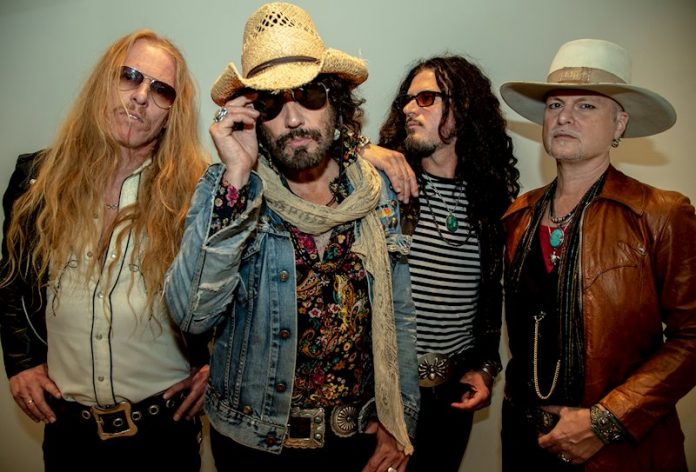 Stockholm based band, Electric Boys, formed back in 1988 and debuted with Funk-O-Metal Carpet Ride in 1989. Two further albums were released before they went on hiatus for a couple of years. Reforming in 2009, they recorded two more whilst touring with the likes of Metallica, Alice Cooper and Thunder. After the delights of the last album, The Ghost Ward Diaries, the line up of Conny Bloom (guitar and vocals), Andy Christell (bass), ‘Slim’ Martin Thomande (guitar), Niclas Sigevall (drums) and Jolle Atlagic (drums) are back with the seventh release called Ups!de Down (the exclamation mark is theirs, not a typo!) The band, once again, deliver a set of quality rock songs with hints of such diverse bands as Bad Company, Aerosmith, Hendrix and a little Purple.

The pandemic situation it was recorded under is reflected in the lyrics and whilst despairing of some areas, it has a very positive message too.

The opener, ‘Upside Down Theme’ is seven spectacular minutes of quality riffing and solid solos before an acoustic bridge brings in a slide solo and a change of pace. It’s an instrumental – full of pure joy with each distinct section speaking volumes. ‘Tumblin’ Dominoes’ is a tale for today over a melodic and rocking instrumentation. Fancy some surf punk rock? ‘Twang ‘em_Kerrang ‘em’, delivers brilliantly. The ballad box is ticked majestically on ‘She Never Turns Around’ with the acoustic/electric blend working well… have your lighters at the ready for when tours recommence. The wonderfully titled ‘Interstellafella’ wraps the package up nicely with a good-time boogie of totally accessible complexity…the lyrics are neat too. A warning: the silence at the end of the track does lead somewhere; I’ll let you discover where!

This is a powerful album that warrants a few listens to fully appreciate the depth and class on offer; that instrumental is worth the entry fee alone and the quality doesn’t drop on any of the ten varied and engaging tracks.

Ups!de Down will be released in digital, LP and CD formats by Mighty Music on 30th April 2021.