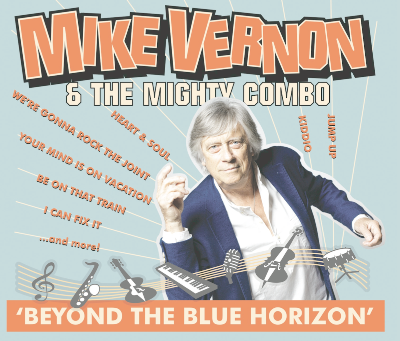 Legendary record producer Mike Vernon is stepping up to the microphone as Mike Vernon & The Mighty Combo line up a series of dates throughout Europe from now until October with the release of their debut album Beyond the Blue Horizon due on September 7th through Manhaton Records.

Best known as the founder of the Blue Horizon record label, in 2013, he was awarded the BASCA Gold Badge Award in recognition of his unique contribution to music.

Vernon’s studio work has seen him work with some of the most famous artists in British rock and blues. These includes John Mayall’s Bluesbreakers (featuring the likes of Eric Clapton, Peter Green and Mick Taylor as lead guitarists), David Bowie, Ten Years After, Savoy Brown, Fleetwood Mac (with Peter Green, Danny Kirwan and Christine McVie), Chicken Shack, Focus, Freddie King, Climax Blues Band, alongside the likes of Level 42 and Roachford.

Not so well-known his “other’ job” – that of vocalist. In the 1970s and early 1980s he was not only a member of The Olympic Runners but also the baritone singer with Rocky Sharpe & The Replays, and now he’s making that more of a priority in his creative life.

“To be fronting my own R&B outfit has always been a dream but the right moment to make that transition never appeared until now,” Vernon said of The Mighty Combo who features young Spanish guitarist Kid Carlos, Ian Jennings on upright bass, Matt Little on keyboards, Paul Tasker on saxophone and Mike Hellier on drums.

Taking a trip down memory lane, Vernon said: “The year is 1956 and Little Richard and his totally outrageous song ‘Tutti Frutti’ hit the #1 spot on the U.S. pop charts. Fats Domino had similar success with ‘When My Dreamboat Comes Home’ and ‘Blueberry Hill’ that same year whilst Chuck Berry introduced us to his unique rocking rhythm & blues style with ‘Roll Over Beethoven’. Four slabs of musical genius that were to totally change my life.

“Fast forward sixty-one years to 2018 and the ‘with my own band’ debut album Beyond The Blue Horizon features tough, energising and tuneful rocking slabs of R&B in the vein of Fats Domino, Wynonie Harris, Little Richard and Louis Jordan,” he continued. “Twelve titles in all including nine new self-penned originals and three covers from the catalogues of Brook Benton, Mose Allison and Clarence Henry.”