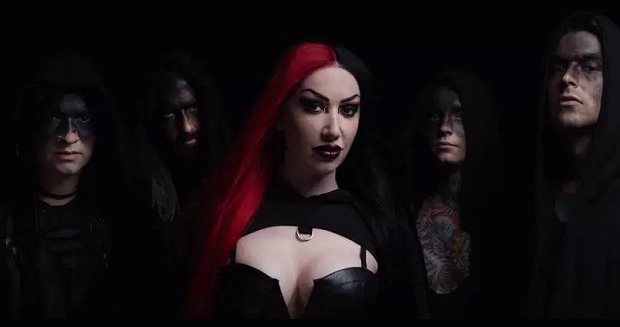 It may not be New Year’s Day, but that doesn’t mean a video for ‘Disgust Me’ can’t be released.

Currently on tour with Halestorm and In This Moment, US hard rockers New Years Day have released a music video for their song. The video certainly does not disgust us. Beautifully shot, it sees vocalist, Ash Costello, truly getting inside of our heads, not just with the catchy chorus, but the entire theme. Casually wandering around the woods, red-haired Ash comes across an abandoned house where she meets her alter ego, a black-haired gothic goddess.

When asked about the video, Ash said,

“‘Disgust Me’ is about seeing the side of someone that they tend to hide. Whether it be because they have deemed it undesirable or unattractive for whatever reason or out of fear of being judged as less than because of the dark sides they possess. ‘Disgust Me’ is asking the listener to not be afraid to show these parts because it just may bring you relief instead of sorrow. I am asked a lot why I decided to dye my hair half red and half black, so I saw the ‘Disgust Me’ music video as an opportunity to give that a story of its own. The all-black-haired girl calling upon the dark spirits to show themselves, and the all-red-haired girl who’s been lost alone in the wilderness, coming together to make one whole person. To me it felt symbolic, like the two sides of me can both shine, the light and the dark.“

‘Disgust Me’ is the first track on New Years Day’s newest EP, Diary of a Creep, which was released in January 2018. The EP is made up of five cover songs, as the band pay homage to their inspirations. These include Garbage’s ‘Only Happy When It Rains’ and No Doubt’s ‘Don’t Speak,’ among others. For more information and upcoming tour dates, visit New Years Day’s website, and watch the video for ‘Disgust Me’ here: