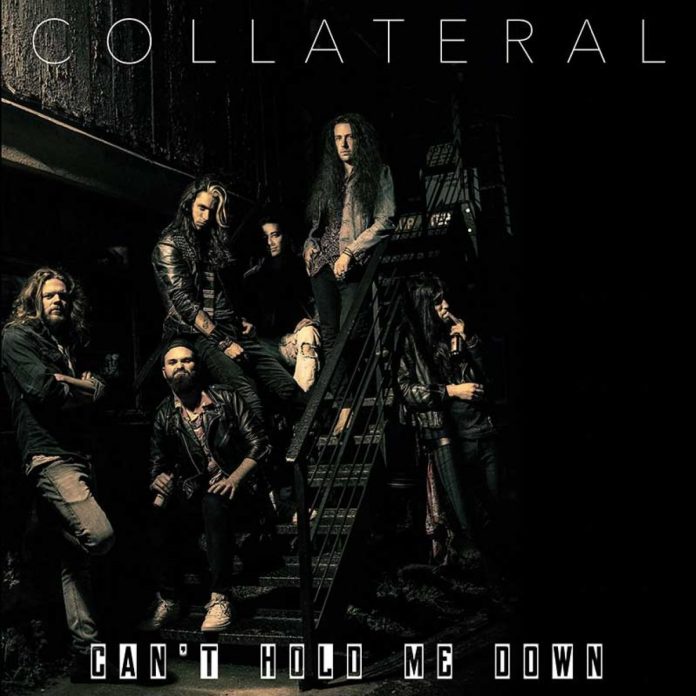 Collateral release new single ‘Can’t Hold Me Down’  is out now on the Roulette Media record label.

In a world that has seen industries, businesses and even families collapse in recent months due to the pandemic, it can be considered a much-needed tonic.

“Many bands were struck hard at the start of the year, with Collateral being struck half way through their debut album tour that reached Top 5 in the Official UK Rock Charts so there is no surprise that frustration would lead to an empowering full out rock song that would hopefully inspire people across the world to keep focus on the light at the end of the tunnel.. And that is exactly what they have done,” came down the word from on high.

“’Can’t Hold Me Down’ is a song that has many layers and stories that ultimately comes back to one thing, ‘I won’t be held down’,” said the band’s frontman  Angelo Tristan, as evidenced with the lyrics, “’I used to be the one with my head in the clouds, chasing the dream to write the perfect rhyme’ to the monstrous multi-voice Queen style chorus with ‘You Can’t Hold Me Down’”.

“We didn’t want to write a typical covid song. What’s the point?” said Angelo. “The 6 o’clock news is doing that for you day in day out. People don’t need that right now. Some people might see this as a rebellious track. Maybe it is.  Our intention is only to try and inspire people to get through the other side of this with a track that brings comfort and a hard pounding beat.”

“‘Can’t Hold Me Down’ is different from the other singles that we have released. It’s less angry than ‘Lullaby’, it’s more modern than ‘Mr Big Shot’, it has more balls than ‘Midnight Queen’, and it completely contradicts ‘Merry Go Round’.  I think our fans are beginning to see a variation starting to appear in our sound and writing which is keeping everyone on their toes, including the band.”

Collateral’s ‘Can’t Hold Me Down’ is available by clicking here. Plus, the band has released a video to the song that’s featured here at RAMzine.