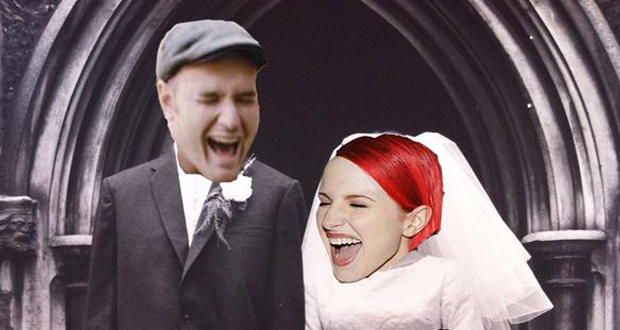 On new year’s eve, Paramore front-woman, Hayley Williams, announced her engagement to New Found Glory guitarist and producer Chad Gilbert via her Twitter account.Williams posted a ‘photoshopped’ picture of the couple as if it was their wedding photo.

This was accompanied with the caption “Hey, guess what?” Gilbert  posted the image to his Instagram account, adding that he had “popped the question on Christmas Day”. The likes of  Taylor Swift and Katy Perry tweeted messages of congratulations to the couple.

“Personally, Hayley and I, we’d been dating for six years, and we hit a rough patch in our relationship, and it was great, being able to get that out in these songs”.

The NFG guitarist and producer went on to say:”It made things better for us, you know what I’m saying? There was so much going on at this time that you can dig deep into the record. That’s another thing, what the songs of ‘Resurrection’ are about; looking at the challenges not as negative things but to really take them in a way that tests your value as a person”.

Chad Gilbert has recently produced albums by bands such as A Day To Remember, Candy Hearts and Trapped Under Ice.