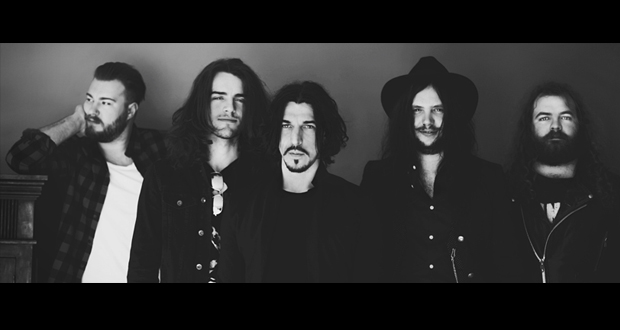 Here at RAMzine, we love nothing more than introducing you guys to the newest, freshest talent out there. We discovered Midlands based rock ‘n’ rollers Piston last June (check out our mini feature here) and suffice to say we were blown away by the soul-filled swagger of this five piece’s sound.

It seems we weren’t the only folks who were impressed as Piston have since toured and played shows with Sebastian Bach, The Temperance Movement, Reckless Love and Voodoo Six to name but a few. They have appeared at both Hard Rock Hell and Planet Rock Stock, been featured in Classic Rock Magazine and online segments with Tom Petty and The Heartbreakers. And let’s not forget their presence on the hallowed playlists of Planet Rock (#20 most played), Team Rock, Total Rock & Kerrang!

Fast forward one year and the lads are ready to officially unleash brand new live track ‘Fade Out’ on August 3rd. It will also be an opportunity for the band to introduce new vocalist and frontman Rob Angelico following the departure of former member Steve Nunn.

Guitarist Jack Edwards had this to say on the song:

“This is the first official video back with our new frontman – Rob Angelico. It’s a super cool live video and the track is more of our best work. The video is also an insight to how we sound, and the prep coming to the shows! Rob was the first guy I had in mind before Piston even started and had a full line up a few years back. We couldn’t work out schedules so it didn’t end up working, but as soon as we announced the departure of Steve he showed up and it was an instant connection.”

“I am so proud of this new single, and this is one of many more to come. I am honored and excited to be joining Piston and working with the band to take things to the next level. In the immortal words of Bob Dylan, you are going to want to “Play it loud!”

Fancy catching these guys live? Piston will be opening up for Nazareth October 17th in Great Yarmouth, and shall be doing an exclusive appearance at Birmingham Symphony Hall on August 9th. They will also be opening for The Doors Alive on August 30th at the Robin 2. There are more dates still to be announced.

For all the Piston news and info, be sure to hit up the band’s social networking pages – the links to which we have provided below:
www.facebook.com/pistonuk
www.twitter.com/pistonmusic
www.youtube.com/pistonband