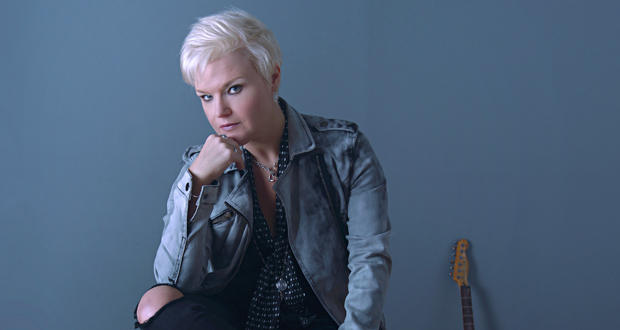 Voted Female Vocalist of the Year at the FORM UK Blues Awards, this latest offering sees her in rockier mode, though long time fans are unlikely to be disappointed.

Consulting with no less than Rolling Stones producer Chris Kimsey to select and refine the 12 tracks she co-wrote with guitarist Steve Birkett, then flew to California where five tracks were mixed by Bill Drescher, renowned for his work with the likes of Rick Springfield and The Bangles, returning to the UK where Thunder’s bass guitarist Chris Childs took care of business.

“We were honoured and humbled to receive Chris Kimsey’s guidance,” said Downes. “He gave us confidence about the direction of our writing changing to a rockier sound and advice on the way the material should be recorded. Meeting Bill Drescher in LA was fantastic – such a lovely, down-to-earth guy – and his mixing took the five tracks to the next level. Chris Childs has since done an excellent job on the rest in matching Bill’s mixing style.”

Featured alongside Downes and Birkett on the record are rhythm section Dan Clark and Lloyd Daker and Magnum keyboard player Rick Benton, plus some aforementioned guest appearances. The multi-award winning Alan Nimmo (King King) plays guitar on ‘If I Go To Sleep’ and Magnum’s Tony Clarkin delivers the guitar solo featured on ‘Breathe Out’.

The full track listing for More Sinner Than Saint is: ‘Take Me Higher’, ‘More Sinner Than Saint’, ‘Chains Fall Down’, ‘If I Go To Sleep’, ‘Screaming Your Name’, ‘Stand On My Feet’, ‘Hurts’, ‘Big Sky’, ‘With Me’, ‘In Reverse’, ‘Wave Them Goodbye’  and ‘Breathe Out’. You can pre-order the album now.

“We are very proud of this album and the way the music has evolved towards rock,” said Downes. “More than ever before; we believe it captures the best of our song writing.”

Currently on tour supporting The Quireboys, Rebecca Downes will also be playing her own headline dates and festival gigs throughout 2019:

Unplugged/acoustic support to The Quireboys Unplugged: