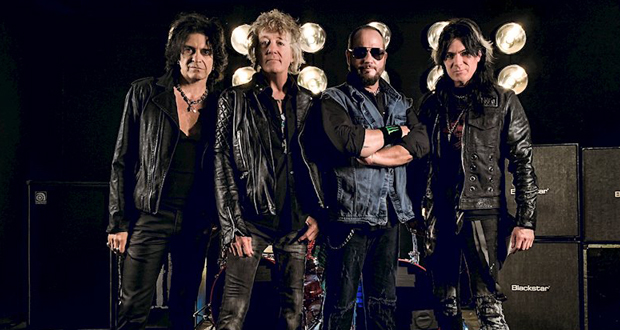 A New Revenge might be what’s termed a super group of the heavy metal variety, featuring four well known talents who’ve come together to deliver their debut album, Enemies & Lovers out on 29th March and single ‘The Way’ that’s available right now.

“We said ‘Let’s get together and come up with three or four original songs.’” Kelli recalled “Beginning the songwriting without any pressure, just creating as we went. Finally we got to the eleven songs we were all happy with. ‘Here’s To Us’ was the first song we wrote for this record. It came very fast and was pretty simple to write. It’s basically an ode to hard rock fans the planet over”

Enemies & Lovers will be released on Golden Robot Records and it can be pre-ordered now.

“It’s been a long time coming but it’s completely finished mixed, mastered and all ready to go. We all really, really excited to finally unleash this on the hard rock community,” said Kelli. US dates are planned and they are looking at locking in a European tour later in the year.

You can catch your first sight of A New Revenge by watching the video for ‘The Way’ here at RAMzine – Though eagle-eyed fans will note the appearance of Phil Soussan on bass, who stepped in at the last minute due to Sarzo having scheduling conflicts on the day it was filmed.

Tagged with: A New Revenge