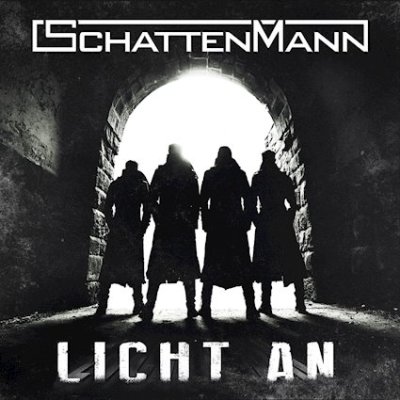 Neue Deutsche Härte, industrial and metal, as infected by melodic hooklines is what we’re promised on Licht An the debut album from Schattenman released on 2nd March through Drakkar Entertainment.

“We sing about things that keep us in suspense,” said vocalist Frank Herzig, who also produced the album at West Records Studios. “We want to unearth the things hiding deep within us.”

Formed in Nuremburg in the latter part of 2016, the line-up is completed by guitarist Jan Suk, bass player Luke Shook and drummer Nils Kinzig. “We’re more than ready to give everything we have for Schattenmann”, Herzig added – And the past months are evidence of their intentions with lots of concerts and an exclusive and sold-out tour EP under their collective belts..

“Schattenmann stand for an enigmatic, inexorable journey between light and darkness,” said Herzig. On Licht An we are told to expect thundering heaviness counterbalanced by epic melodies, militantly marching beats one moment and fierce thrash drumming the next as huge walls of guitar blend with orchestral synthesisers.

You can find out in full for yourselves on 2nd March but prior to that check out the videos presented here at Ramzine.