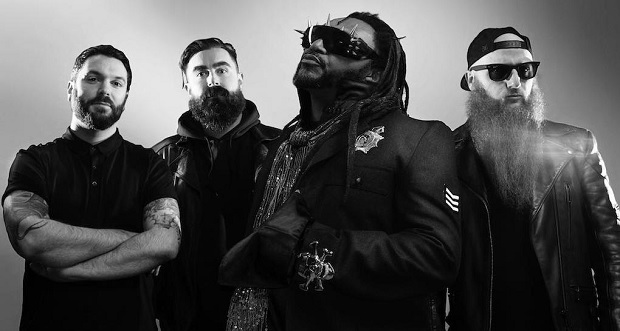 Welsh rockers Skindred have released the lyric video for ‘It’s A Crime’ which will be included on the re-issue of Roots Rock Riot.

This track was only available on the Japanese version of the 2007 album until now. The re-issue of Roots Rock Riot is due for release on April 23rd and will include some extra rare/unheard tracks. Merch bundles and pre-orders are available here.

Drummer, Ayra Goggins, had this to say about the new version of the album:

‘It’s a Crime’ was written in 2006 in our basement studio below St Joseph’s Boxing club in Newport … It’s where all the writing for Roots Rock Riot took place. The only reason it didn’t make the album was because of how the album tracklisting flowed. We were so happy with how the album progressed from the opening of chaos of ‘Roots Rock Riot’ to the epic ending of ‘Choices And Decisions’ we didn’t want to crowbar another song in needlessly. It was a hard decision to leave it out but we are so happy it’s being included in the re-release. It was always a band and producer favorite.”

Skindred also has a UK tour planned for the end of the year, with special guests Royal Republic. Dates are below:

Check out the time we caught up with the guys from Skindred at Bloodstock Festival in 2017 here.