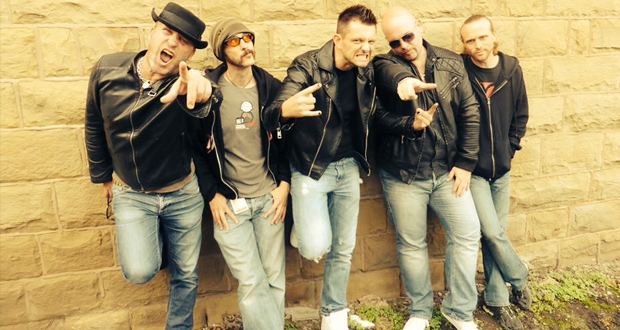 In the three years since Slam Cartel released Handful of Dreams the young rock band have been busy touring opening for the likes of Queensryche, Y & T and Vandenberg’s Moonkings, as well as headlining on their own Vanishing Worlds UK Tour where they’ve been receiving an enthusiastic reception for two new songs, ‘Vanishing Worlds’ and ‘Hypnotised’, that will be available as a double A side single on 16th December 2014.

With a new line-up that finds them “energised” and has given them a “powerful edge” Slam Cartel went into the recording studio with producer George de Angelis and Grammy nominee Mandy Parnell, where they adding textures and ambience but kept their” familiar true rock sound, combining memorable hooks and epic riffs”.

Slam Cartel are Gary Moffat (vocals), Terence Warville (guitar), Marc Neudeck (bass), Damo Fawsett (guitar) and Steve Campkin on drums and will be touring throughout the UK again in 2015, but right now you can treat yourself to an early Christmas present by buying the Vanishing Worlds/Hypnotised CD direct from the band’s website or downloading it digitally at itunes.