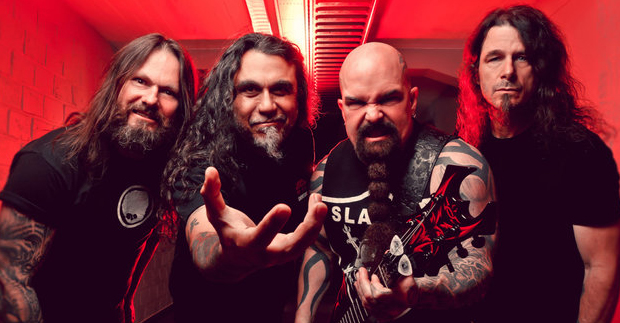 Conceived and directed by BJ McDonnell and featuring some of today’s most iconic horror movie actors including Danny Trejo (‘Machete,’ ‘From Dusk Til Dawn’) and Jason Trost (‘Hatchet III’), the premiere of ‘Pride in Prejudice’ marks the final addition to the ‘Repentless’ music video trilogy. It plays with stylistic differences and where one video plays like an action film, this third and final story is more of a dramatic piece that is especially sinister in tone. The conclusion is visually cinematic and harsh, with Slayer conducting us through it all with ‘Pride In Prejudice.'” Axeman Kerry King had the following to say on the video itself:

“It was a pleasure working with BJ on this project. Slayer is notorious for letting the artist be the artist, the producer be the producer, and the director be the director, etc.  By doing this we get a completely unique perspective that never really strays far from our own.  Get ready for video three.  It’s my favourite!!”

This Autumn, Dark Horse Comics will publish a three-issue comic book series based on McDonnell’s original concept for the ‘Repentless’ video trilogy and written by Jon Schnepp.