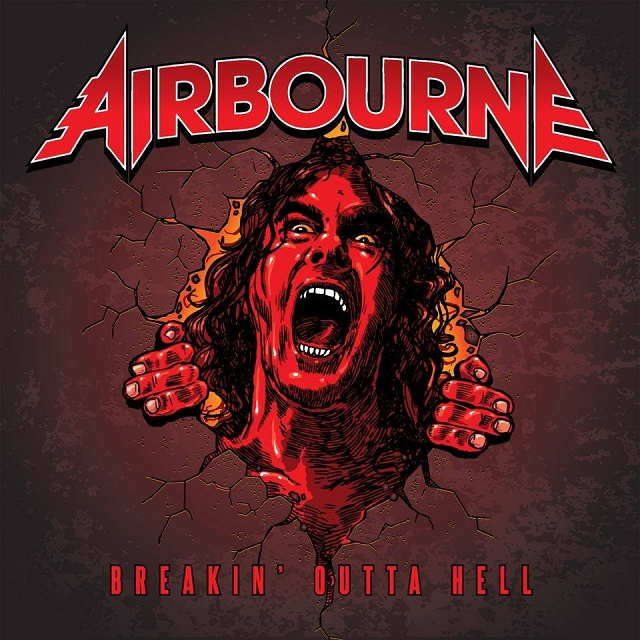 Having been around now for more than a few years, Airbourne haven’t been one to need to change their sound at all, still sounding as fresh as when they first smashed onto the global scene. While fellow Australian rock Gods AC/DC are now arguably going through Hell, Airbourne are most definitely living up to their upcoming new album release and ‘Breakin’ Outta Hell‘.

Instantly opening with the title track, ‘Breakin’ Outta Hell’ has them sounding as good as ever and in their classic rock ‘n’ roll sound. This is a track that sounds like they are doing as it says while straddling a rocket! Catchy, lively, explosive, everything you expect really! Following on is ‘Rivalry’, a track that if ever there was one, would be their battle cry for the title for Australia’s best band.

Two tracks in and you can tell that these are definitely becoming the flag bearers at the perfect time for the filling the boots of AC/DC, the nations rock ‘n’ roll glory is in safe hands, and there could not really be a better time for Airbourne to release this record to concrete themselves in such an iconic position.

‘Get Back Up’ carries on the fighting attitude singing about never staying down, no matter what. A lot lighter on the guitar tones than the first two tracks, but none the less a great track. As soon as you get that attitude in your hard that the tones seem more cleaner than distorted, the next song screams at you! ‘It’s Never Too Loud For Me’ brings the party back into play. Joel O’Keefe really pushing the range in his voice, any normal man would blow his voice out attempting to get the power and roughness at such a high range.

The whole album carries on in typical style, almost making it difficult to review. If you know Airbourne, you already know what you’re getting. If you don’t and like your rock and roll, then chances are you’ll either love it or you’re wrong! Smashing through 11 tracks over just shy of 40 minutes just seems to come as a breeze to the guys, and unlike what some of the track titles say, with rock and roll this good, they aren’t ‘Going to Hell for This’, after all, ‘It’s only Rock and Roll’.

It’s all very much standard Airbourne, except there is just nothing standard about Airbourne!

Breakin’ Outta Hell is out on September 16th via Spinefarm Records.