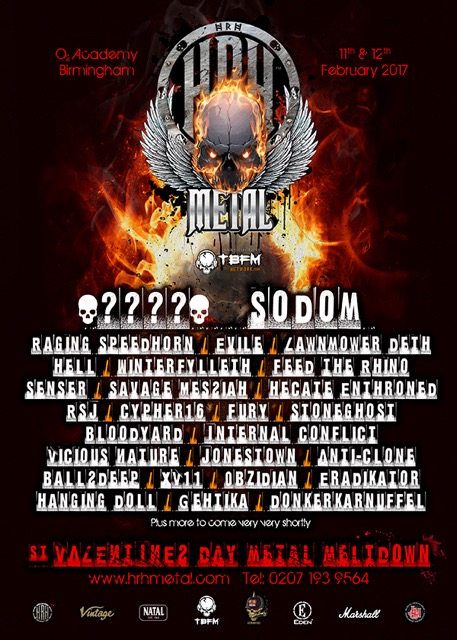 In yet another edition of the Hard Rock Hell series, Sodom, Raging Speedhorn, Evile, Hell, Lawnmower Deth & Winterfylleth have all been announced for a new 2 day, 3 arena HRH Metal 11th & 12th February 2017 in Birmingham.

HRH CEO & Founder Jonni Davis commented “it’s the 10th year of HRH and its time we gave all fans old and new something to celebrate it with. To kick start 2017 in style, this type of event at such a special time of the year, nice and central, should mean everyone can join in for a killer price. It is just our way of saying Thank You. We are humbled by the faith and loyalty that everyone has shown and now it’s time to ‘Pay it forward’.”

Sodom are one of the main attractions who look to head back to the UK once more after the release of their latest album ‘Decision Day’ which has been highly praised by the thrash community.

Whilst the first 27 bands have been announced for HRH: Metal, there will be further additions with the next announcement containing another 12 bands.

For now, the lineup as it stands is: