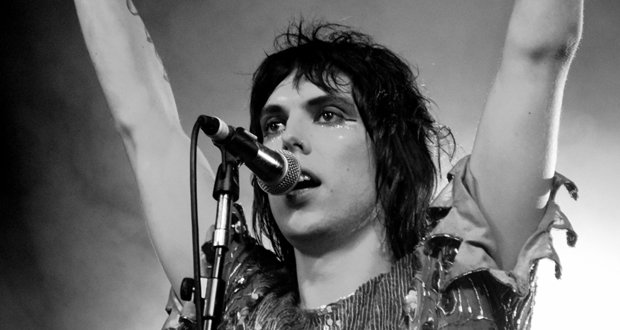 The magnificent Struts, who have been having fun pompadouring themselves around the United States this summer, have made it back to Blighty in time for the Reading and Leeds festivals.

They will be playing on the NME/Radio 1 stage.

Derby’s most glamorous and flouncing rock ‘n’ rollers are currently swanking about their magnificent achievement on the charts with their hit single ‘Could Have Been Me’ — in 7th place in the Billboard Modern Rock Chart and #8 in the Billboard Alternative Songs charts.

And now it’s had over 2 million plays on Spotify.

The Struts, who are are no strangers to a little dolled-up narcissism don’t take themselves too seriously.

Frontman vocalist Spiller is as fabulously theatrical as Freddie Mercury and Mick Jagger combined, while companions (Adam Slack, Jed Elliot and Gethin Davies) deliver intense rock songs that are strong, colourful and, above all flamboyant.

‘Could Have Been Me’ is from their debut album ‘Everybody Wants‘ which will come out via Polydor soon.

You can watch the video HERE: