Takedown Festival 2013 is looking absolutely fantastic this year with an utterly killer line-up featuring the likes of The Blackout, Don Broco, We Are The Ocean and While She Sleeps. And just to sweeten the deal, organisers at Takedown Festival have announced an awesome after-show party to keep you dancing all night long.

This year’s after-show party will be hosted by the esteemed rock and metal club night people at Uprawr in association with Monster Energy. DJs for the night will include rising dubstep kings Tek One alongside Kerrang! Radio boys Alex Baker and Tommy Noble and other resident Uprawr DJs. The party will take place across two rooms of Southampton University’s Student Union Complex with music for all tastes and giveaways from Big Deal Clothing.

Check out the event poster below! 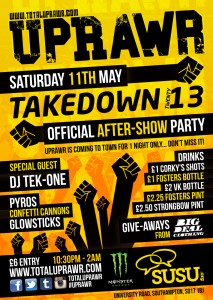 Tickets for both the festival and the after-party are available here.